September is not one of the four key months for revenues; however, due to federal filing requirements for individuals and corporations, September can see higher revenues compared to other months. As shown in the table below, the preliminary personal income tax (PIT), corporation tax, and sales tax collections are $272 million above the estimate for September. For the year, collections are running $979 million above the budget act estimates. 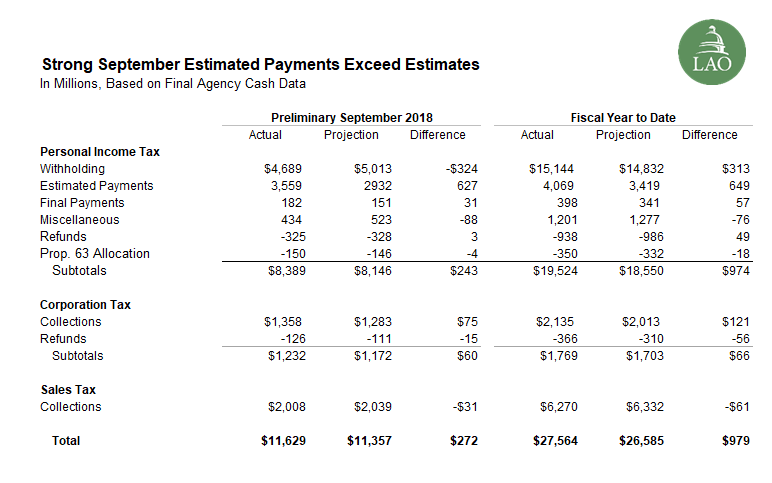 Strong Estimated Payments Account for Much of Higher September Total. Estimated payments—overwhelmingly paid by high-income earners—were $627 million higher than expected in September. This increase was offset by lower withholding. As we noted last month, withholding has been growing over 9 percent on average compared to 2017. The dip in September is due to the fact that September 2018 had one less processing day for withholding than September 2017. With an additional day—which fell into August this year—withholding would have met the monthly projection.

Sales Tax Adjustments. As noted in previous posts, sales tax now is collected using a new IT system. One element of this new system is that payments made at the end of the month are not validated until the next month. Consequently, there are payments that are attributable to September, but are not counted towards September because the payments were validated in October. (This issue was particularly notable in July when quarterly payments were due.) Adjusting for these end-of-month payments in September would have increased sales tax collections by $44 million.