This post includes two figures that track the state’s progress in meeting the administration’s January 2019 projection for April personal income tax receipts. We also discuss the extent to which April collections made up for the shortfall in January. At the end of the post, we provide an update on corporation tax collections.

April Is a Major Revenue Month for the State. Filers—individuals and businesses—pay taxes all year long through withholding and payments to state tax agencies. Budget watchers monitor monthly revenue collections to compare how actual resources are tracking with estimates. Results from some months are more important than the results from other months due to when different types of tax payments are due. In April, individuals are required to file their final tax payments associated with their taxable income from the prior year. (In addition, higher income earners are required to make their first quarterly payment for 2019.) As a result, April is one of the largest collection months for the personal income tax (PIT), the state’s largest source of revenue.

Administration Estimated the State Would Collect $15.5 Billion in PIT Payments in April. In the Governor’s budget, the administration estimated total April collections would be $15.5 billion (net of Proposition 63 transfers to the Mental Health Fund). Of this amount, the administration estimates $14.2 billion will come from final and extension payments related to tax year 2018 and estimated payments related to tax year 2019. The figure below tracks daily collections of these “FTB payments.”

The green line represents an estimate of daily collections necessary to meet the administration’s $14.2 billion projection for the month (based on the historical pattern of payments). The purple line shows actual collections through the month. As seen in the figure, collections on the days right after tax day were significantly above the projection. Actual FTB payments for April were over $16.8 billion. 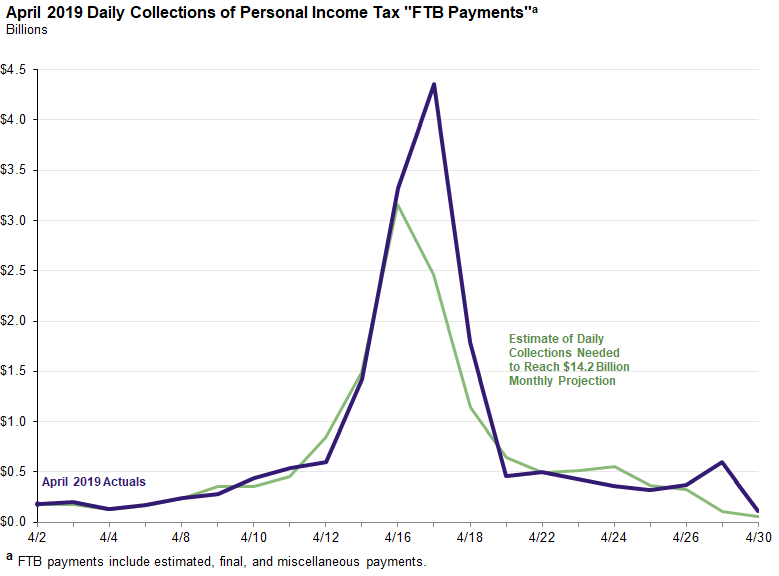 In addition to FTB payments, the administration estimated the state would collect $5.2 billion in withholding and would refund $3.7 billion to taxpayers. The figure below shows the cumulative total of all PIT collections through April 30th. (The green line reflects the daily projection for collections based on the historical pattern of payments. The purple line reflects the most recent total.) Total withholding for April was $5.7 billion and total refunds were $3.9 billion. (Note that due to the Mental Health Services Act, the total reported in the chart below is somewhat lower than the sum of FTB payments, withholding collections, and refunds.) 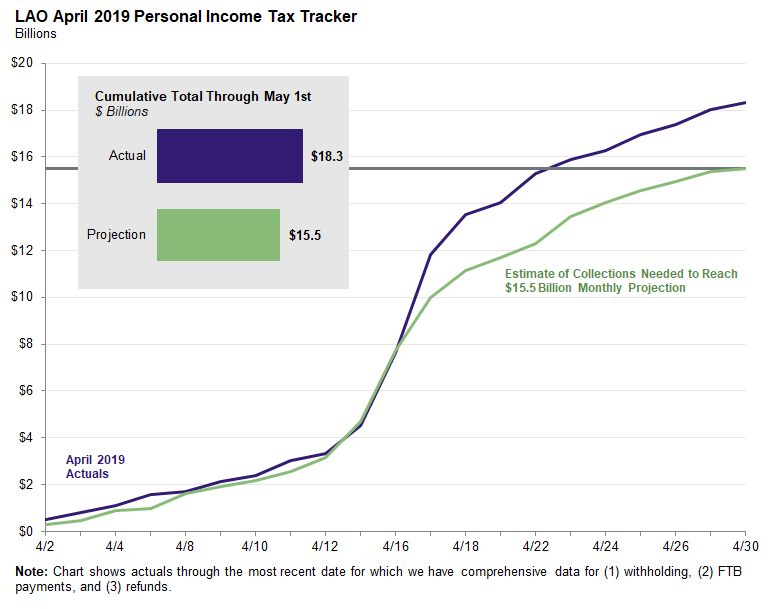 Tracking Year-to-Date PIT Shortfall. As described in our earlier post, January PIT collections fell short of projections by almost $2.7 billion. We believed a portion of the January shortfall was due to changes in federal tax law and consequently April payments would be higher than projected. However, only to the extent revenues exceed projections in April (in which case the purple lines would be higher than the green lines) would the state make progress towards making up for this shortfall.

Preliminary April collections data indicate this has been the case: Current total collections are $2.8 billion ahead of the projection  for the month.