Personal Income Tax (PIT) Collections Fall Below Monthly Estimates. Relative to June estimates of monthly revenues, December 2018 collections fell significantly below expectations.  The Governor’s budget adjusted upward expected January 2019 tax payments, expecting that the December shortfall would be made up in January. (The Governor’s budget also increased overall revenue projections and updated prior months projections to actuals.) Revenues in January, however, also fell below the administration’s new estimates as seen in the table below. Year-to-date, collections from three of the state’s largest taxes—the PIT, corporation tax, and sales tax—are $2.4 billion below expectations. Some of this shortfall likely is explained by the decline in the financial market (and tech stocks in particular) at the end of 2018. There are good reasons to believe, however, that a portion of this shortfall could be made up in April. The rest of this post explains why this could be the case.

Prior to 2018, December and January Collections Among the Highest Collection Months of the Year. While most PIT collections are from withholding, tax filers who do not prepay all their taxes through paycheck withholding must make quarterly payments to the state based on their estimated tax liability for the year. (Estimated payments represent the second largest category of PIT payments. In general, filers are required to pre-pay—through withholding or estimated payments—90 percent of their final tax liability or pay penalties. In April, filers make final payments or claim a refund for the difference between the amount paid in advance and their tax liability.) Most estimated payments come from filers who receive a large share of their income from business income, capital gains, and other non-wage income. Prior to 2018, the largest  payments were received in December, January, April, and June, as seen in the figure below. 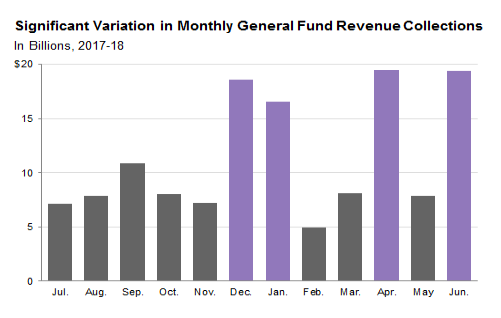 State and Local Tax (SALT) Deduction Created Incentive to Pay State Taxes by the End of the Year. Prior to 2018, all state and local tax payments could be deducted on federal tax returns. This tax deduction created an incentive for filers to pay their state taxes before the end of the calendar year. By doing so, filers could deduct those payments on their federal tax returns for that year. As a result, filers making state estimated payments often prepaid their January estimated payments and anticipated April final payments in December in order to deduct those amounts on their federal taxes.

Federal Tax Law Change Altered Incentives. Federal tax law changes in 2017 capped the SALT deduction to $10,000 per year starting in 2018. For most filers, this change eliminated the incentive to pre-pay state tax payments (because their state tax payments already exceeded the cap). As a result, December estimated payments were significantly weaker than prior years ($1.1 billion in 2018 compared to $7.7 billion in 2017 and $4.6 billion in 2016).

Administration’s Monthly Revenue Estimates May Not Have Fully Accounted For Federal Tax Law Change. With the elimination of the incentive for many taxpayers to pre-pay tax payments, we would expect that taxpayers will pay more of their total tax liability in April (as opposed to December) for tax year 2018 and future years. As a result, estimated payments likely will make up a smaller share of total payments in 2018 than in past years. The administration’s monthly revenue estimates, however, do not appear to fully account for this likely change in taxpayer behavior. The administration assumed that estimated payments would comprise the same share of total payments in 2018 as they did in 2017. Had the administration adjusted its assumptions, expectations for December 2018 estimated payments would have been notably lower. Had December expectations been lower, the year-to-date revenue shortfall would also be lower. Although it is difficult to say how much this contributes to the apparent shortfall, our best estimate is over $1 billion of the $2.7 billion shortfall could be made up by higher than anticipated April payments.

Federal Estimated Payments Show Little Sign of Weakness. Consistent with the expectation that some of the December/January shortfall will be made up in April, estimated payments for federal personal income taxes did not show any obvious signs of weakness in January. Instead, they rose from $92.2 billion in 2018 to $100.6 billion in 2019. As California’s economy generally has been growing in line with the nation, we would not expect weakness in California’s estimated payments. That is, absent federal tax changes we would have expected December/January estimated payments to have grown from year to year.

Drop in Financial Markets Likely Explains Part of Shortfall. Financial markets declined significantly in the end of 2018. By the end of December, stock prices were 15 percent below their September 2018 peak. While this drop in stock prices probably explains some of the weakness of estimated payments in December, it is unlikely this drop explains a majority of the shortfall. The decline occurred late in the year. For much of 2018, stock prices experienced year-over-year growth. In addition, even with the significant decline in December, stock prices remain high in historical terms. Stock prices at the end of December 2018 were about 10 percent higher than in December 2016 and about 30 percent higher than in December 2013. Because of this, we estimate that weakness in capital gains revenues may only account for less than $1 billion of the 2018-19 revenue shortfall to date.

January Sales Tax Revenue Shortfall May Be Due to New IT System. As we have highlighted in the past, the introduction of CROS has affected the flow of sales tax revenue to the state. This change may not be fully reflected in the administration’s estimates of monthly sales tax collections. Consequently, the shortfall in January could be made up in February. We will update this post as we learn more from the administration.