This note provides technical details on how the new College Access Tax Credit—instituted last year with passage of SB 798 (De León) and SB 174 (De León) —is accounted for on the revenue side of the 2015-16 Governor's Budget proposal. (Credit-related issues concerning Cal Grant Program spending are discussed on pages 65-66 of our analysis of the Governor's higher education budget proposals.)

SB 798 and SB 174. This legislative package, approved in 2014, seeks to increase Cal Grant B awards for low-income students over a three-year period through 2016. As described in bill analyses last year, the measures do this through "leveraging federal tax deductions for charitable donations" based on a concept discussed by Phillip Blackman of Penn State and Kirk Stark of the UCLA School of Law in a 2013 research paper. Relying on a 2010 Internal Revenue Service (IRS) memo, this approach involves the state, by providing a tax credit for charitable contributions to a state fund, "leveraging" federal dollars to generate new revenues for the fund, without a substantial increase in state costs. As noted in a bill analysis last year, "The idea hinges on the current IRS view that charitable contributions to non-profits, and also to a state, are eligible for the federal tax deductions if certain requirements are met." As part of this structure, SB 798 established the new College Access Tax Credit Fund (the tax credit fund) as a special fund in the state treasury.

Benefit for Some Taxpayers. Depending on their individual tax situations, a small portion of personal and business income taxpayers may benefit from making contributions to the tax credit fund. A state tax credit (totaling 60% in tax year 2014, 55% in 2015, and 50% in 2016) is provided for contributions to the fund, with the maximum amount of credits set at $500 million for each year. (State tax deductions are prohibited for these contributions.) When the bills were being considered, legislative bill analyses anticipated that the credits "would be fully subscribed due to the high incentive to taxpayers because according to IRS rules the taxpayer would also be able to take a donation deduction on their federal taxes," allowing a taxpayer to "get back on every dollar donated a total 80 cents to over 95 cents depending on how they file." "As noted by Prof. Stark and Mr. Blackman," one bill analysis last year stated, "this type of a state tax credit is very beneficial to taxpayers subject to the federal Alternative Minimum Tax."

What Happens to Tax Credit Fund Contributions? The California Educational Facilities Authority (CEFA) has established procedures for taxpayers to contribute to the tax credit fund and obtain a certification for the related tax credit. Amounts contributed to the tax credit fund are allocated first to fund a transfer to the state's General Fund equal to the aggregate amount of certified credits, thereby essentially "holding harmless" the General Fund from the direct revenue losses of the new tax credit. (These transfer amounts are counted as General Fund tax revenue for purposes of the state's Proposition 98 school funding calculations.) After this first allocation, remaining tax credit fund amounts are allocated to cover administrative costs and then to fund Cal Grants for eligible students. "If enacted," last year's bill analyses said, "this credit would be one of the most generous tax credits California has ever allowed," although, in contrast to other tax credits, this new credit's unusual features are designed to minimize General Fund revenue losses.

Application Procedure for Tax Credits. Unlike most California state tax credits, the amount of tax credits for this program is capped at $500 million per year in addition to unallocated and uncertified tax credits in the previous year. Accordingly, an application process is required to be eligible for the tax credit. Applications for the credit are being processed on a first come, first served basis by the CEFA, an entity housed in the State Treasurer's Office. While credit usage likely will increase once more taxpayers become aware of the program, the amount of tax credits allocated for the 2014 tax year was far below expectations: just a few million dollars, according to data posted on the CEFA website.

Governor's Budget Proposal: Revenue Estimates Developed Some Time Ago. This unusual tax credit makes the detailed revenue estimates that are a part of every state budget somewhat more complex during the years this program remains in effect. The revenue estimates for the 2015-16 Governor's budget proposal were developed some time before it became apparent that 2014 credit allocations would be below expectations. Below is a summary of the revenue assumptions related to the tax credit fund in the Governor's January budget plan: 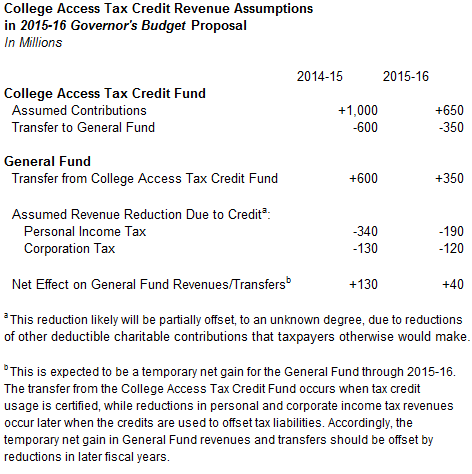 The figure above shows a transfer from the new tax credit fund to the General Fund to cover the direct revenue losses due to the credit. Yet, there is a timing disparity, such that transfers from the new tax credit fund will tend to occur somewhat before the General Fund actually experiences the revenue loss related to the credit (after the end of the tax year, for example, when a taxpayer files a return and claims a refund or offset to tax liability). As such, during this first budget cycle, the General Fund may experience a net revenue increase due to the new tax credit. This increase should be offset by a comparable net revenue loss in future years. Because the transfers from the tax credit fund count as revenues for Proposition 98 calculation purposes, this means that school funding is increased somewhat, at least temporarily, due to this funding mechanism.

May Revision Adjustments Expected. Due to the lower-than-expected credit usage in 2014, we expect that these estimates will be adjusted at May Revision. Nevertheless, the estimates of credit usage then likely will remain largely or entirely speculative. In other words, the amounts to be contributed to the tax credit fund likely will not be known with certainty by the time the state passes its 2015-16 budget plan in June.