The Franchise Tax Board (FTB) is one of California's tax agencies. FTB plays a principal role in administering the income taxes that fund a very large portion of the state budget: the personal income tax (PIT) and the corporation tax (CT).

Revenue Estimating Exhibits. One of the lesser-known roles played by FTB is to assist the Department of Finance (DOF), our office, and other legislative staff and Members by providing income tax data that is essential to making estimates about budgetary revenues and the effects of tax legislation. For our office and DOF, an important FTB function is providing twice-yearly "revenue estimating exhibits" that include various, often highly technical, updates on PIT and CT trends from prior years. FTB recently posted online its most recent exhibits, those from December 2014. (Earlier revenue estimating exhibits are listed on FTB's Reports, Plans, and Statistics webpage under "Revenue Estimating Exhibits.")

Among key pages of the December 2014 exhibits are:

FTB's May 2014 revenue estimating exhibits contain information on the share of the state's PIT paid by the top 1% of PIT filers (see Exhibit A-10, Page 4 of 4, in the May exhibits, as excerpted below). 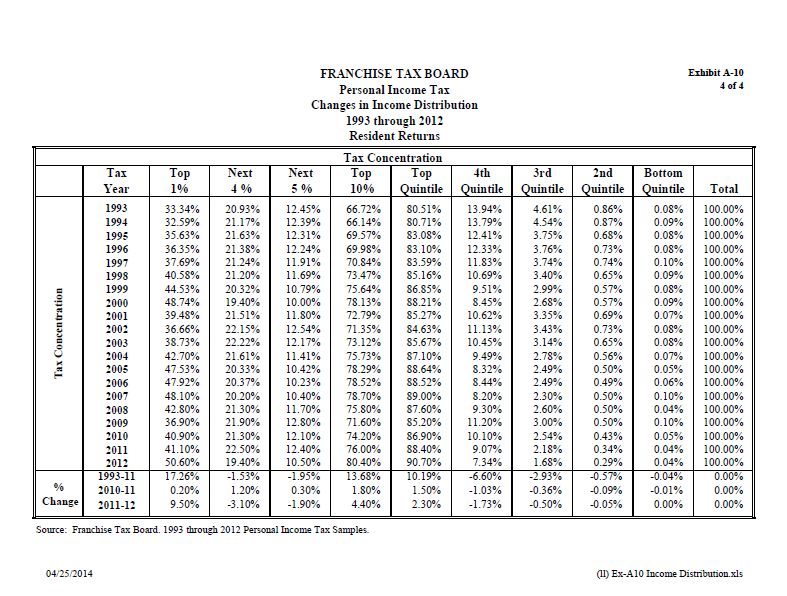