Reflects Newly Updated Administration Revenue Projections. With the release of the 2015-16 Governor's Budget proposal on January 9, the Department of Finance (DOF) increased its 2014-15 revenue projections and updated its future monthly projections of state General Fund revenues. DOF also "trues up" prior months' revenue collections to its new forecast. The true up means that the new forecast already reflects what actual collections essentially were in July through December. In other words, the state "starts fresh" with the new DOF revenue projections at the beginning of January, as well as in mid-May, when DOF releases its updated May Revision projections.

The monthly DOF Finance Bulletin shows that General Fund agency cash revenues finished January $527 million above the newly updated administration projections for the month. Virtually all of the gain resulted from the state's "Big Three" taxes. January "Big Three" revenues finished a combined $512 million above projections. The vast majority of this gain relates to the sales tax and likely will prove to be temporary. Income taxes in January basically tracked the administration's updated estimates, but we think that these taxes are likely to exceed the projections in some future months through June 2015.

2014-15 Revenues Likely to End Above New Administration Projections. The state's income taxes are its most volatile revenues, the ones most likely to end up far above or below estimates, depending on the year. January income tax collections basically tracked the administration's new estimates. So, the key issue now is what will happen in future months. The new DOF projections assume minimal year-over-year growth in PIT withholding in February, March, and June, modest assumptions for final payments to be received on 2014 tax obligations in April, and a decline in June quarterly estimated payments by high-income filers compared to last year (despite somewhat higher stock prices compared to early 2014). There is also the prospect of corporation taxes and SUT beating the DOF projections. For these reasons, we remain of the opinion that 2014-15 General Fund revenues are likely to exceed the administration's new projections by $1 billion to $2 billion and perhaps more, barring a sustained stock market drop between now and June. April and June PIT collections typically play a key role in determining whether and to what extent revenues exceed projections. Both our office and DOF will release new revenue projections in May.

Risks Associated With Higher 2014-15 Revenues. As we discussed in our recent Overview of the Governor's Budget and in our November 2014 Fiscal Outlook, there are risks for the state budget associated with higher 2014-15 revenues. Virtually all of the higher 2014-15 revenue likely will have to be spent on schools and community colleges under existing policies and the state's Proposition 98 school funding formula. Much or all of this rise will increase future years' state spending on schools. Higher revenues also could contribute to increases in the state's Proposition 2 reserve and debt payment requirements for 2015-16. As we noted in our November Fiscal Outlook, more revenues in 2014-15 could make it harder to balance the state budget and, in some scenarios, could mean less money is available for non-Proposition 98 spending commitments. (The Legislative Analyst discussed these issues at recent hearings of the Assembly and Senate budget committees.)

Large Sales Tax Gain Likely Temporary Due To Timing Quirk. As noted above, January is a major month for SUT collections. Collections during January included part of the state's tax cash flow related to holiday sales in late 2014 and were $500 million above the administration's updated projection. This is an unusually large single-month difference from the SUT forecast. Initial indications are that this reflects a quirk in timing, as the typical due date of January 31 fell last month on a Saturday, which complicates forecasting which part of the cash flow is collected in January and which part in February. This all suggests that February sales taxes will fall below projections by a large amount. In other words, much or all of the $500 million January sales tax gain is likely temporary and can be expected to be offset by a February sales tax shortfall of similar size. Such challenges in forecasting the exact timing of sales or income tax receipts are common.

January 2015 Revenues: By The Numbers 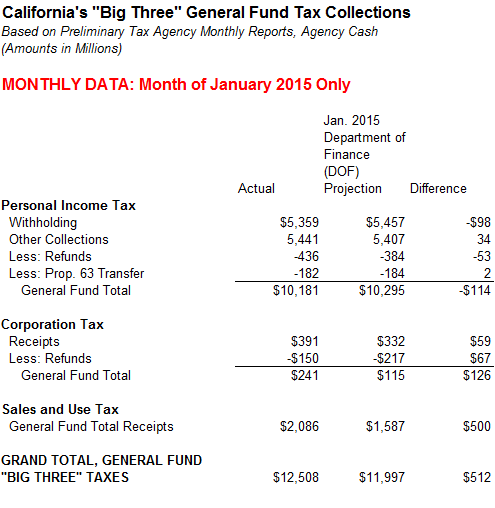 Following December's strong results, PIT withholding lagged last January's results for much of the early part of the month. Because December and January PIT withholding often includes substantial year-end bonus payments for higher-income workers, it is possible this means that this year's bonuses were lower than last year for California taxpayers or that they were paid at a different point on the calendar. Withholding trends, for example, improved later in January.

While FTB PIT collections (largely year-end estimated payments on capital gains and business income) were up from last year, the trend in January was not as strong as in December. Year-end estimated payments were 44% higher in December 2014 compared to December 2013, but only 14% higher in January 2015 compared to January 2014. (These percentages reflect the state's "agency cash" convention of booking a large portion of January 2 collections to the month of December.) While January 15 is the deadline for year-end estimated PIT payments, many taxpayers make these payments in December to count these state taxes as deductions on that year's federal tax return, so considering the combined totals for December and January also is instructive. For the two months of December and January combined, estimated payments were significantly above last year's levels (up 26% "year over year" across the two-month period).

Looking Ahead to April 2015 PIT Collections. Total estimated PIT payments collected by FTB from February 2014 to January 2015 (generally representing projected tax liability for calendar year 2014) were up 20% from the same period of the previous year. As shown below, DOF now projects that "final" and "miscellaneous" payments in April 2015 will be up 12% from April 2014. Historically, the correlation between the growth rates of estimated payments and final payments to be received in April has been fairly loose, as suggested below. Still, the trend indicates the possibility that April 2015 PIT collections will be higher than DOF now projects. 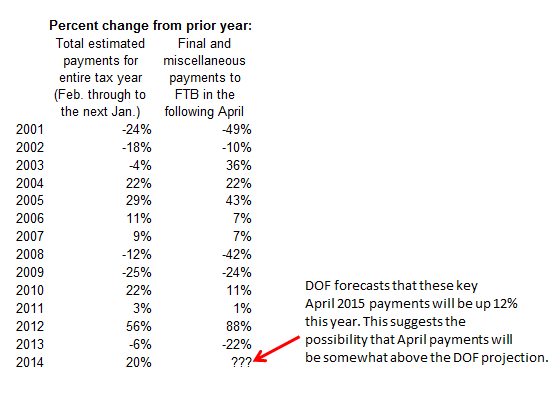 Sales Taxes in January. As shown below, January typically is one of the largest SUT collection months of the year. (It is very difficult to compare the same month's totals from one year to the next, due in part to due dates falling on different days of the week each year.) January SUT collections also proved to be significant (over $2 billion) this year. In its updated projections, however, the administration assumed that January 2015 SUT collections would be smaller than usual ($1.587 billion) and that February 2015 collections would be larger than usual ($2.630 billion), thereby implicitly assuming that with this year's January 31 due date falling on a Saturday, much more of the 2014 year-ending SUT collections would come to the State Treasury in early February. Instead, it appears that a large portion came in during January. This suggests that February SUT collections will fall short of the administration's projection by several hundred million dollars, as noted above. 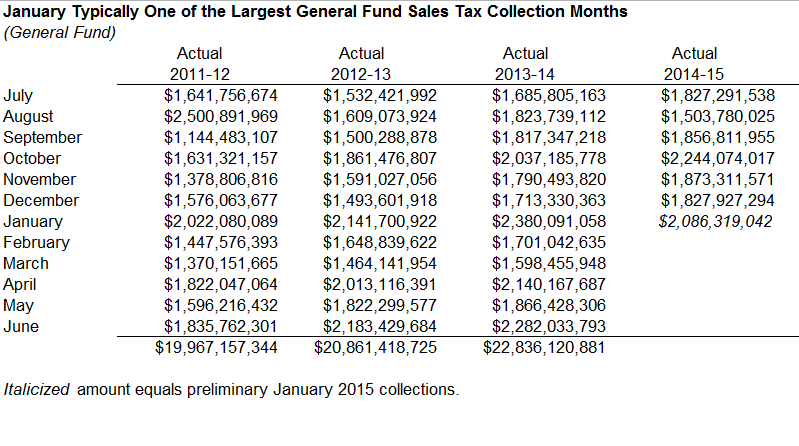 Methodology. Agency cash reports such as these are the most timely method of tracking California budgetary revenues. An alternate source of data, Controller's cash, is not used for this purpose. General Fund amounts are the focus of this revenue report. For this report, General Fund revenues generally include those revenues directed to the Proposition 30 Education Protection Account.