How Long Do Firms Take from Founding to IPO?

Bottom Line: Our analysis of data on how long it typically takes for companies to go public suggests California should continue to experience numerous initial public offerings of firms valued over $1 billion. As a result, the state should continue to see significant revenues from IPOs for the foreseeable future.

Initial public offerings (IPOs) of California-based companies often generate significant tax revenues for the state. An IPO occurs when a privately held business decides to make shares of its stock available to the public for the first time. After an IPO, the firm’s employees often receive shares of the company’s stock either immediately or following a certain time period, typically six months. These shares generate revenue for the state in two ways: (1) when received, they are recognized as ‘supplemental wages’ for tax purposes, which the firm is required to pay withholding on, and (2) when sold, the employee owes income tax on the capital gain if the stock’s selling price is higher than the price when the employee first received it.

While determining the exact amount of revenue the state has received from any given IPO is not possible, our office has noted that income tax withholding typically rises after a larger firm goes public. The flood of IPOs over the past year or so appears to be a key driver of the state’s surprisingly strong revenue growth in fiscal year 2020-21.

Most California firms that have gone public lately received significant funding from venture capital (VC) firms at several points before going public, starting at the ‘seed’ stage when a firm is just starting out and typically has no revenue yet. Data from Crunchbase, a private data service, show that seed and pre-seed stage funding has risen steadily over the past ten years. 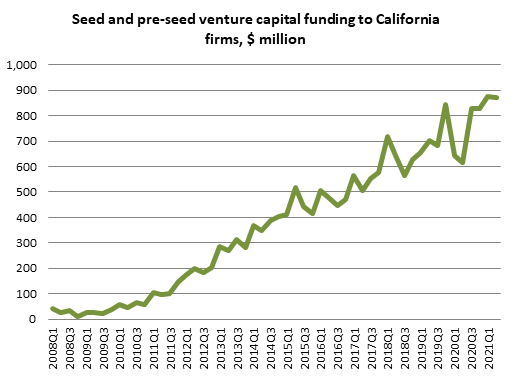 We note that typically less than 10 percent of total VC funding goes to firms at the seed and pre-seed stages, that many firms which receive seed funding will shut down or be bought out by larger firms before they have a chance to go public, and that later-stage funding also has implications for the state budget. Nonetheless, seed funding can be a useful long-term indicator.

To examine the issue of when we should expect the most successful seed-stage firms to go public, our office used Crunchbase data on all 859 California companies that have gone public since 2010. Key implications for the state’s budget from our analysis include:

Below we discuss additional details from our analysis.

The first figure shows that the median age (as measured from its founding date to its IPO date) of California IPOs was typically around 8 years from 2010 to 2016, and has been in the 9-10 year range since then. 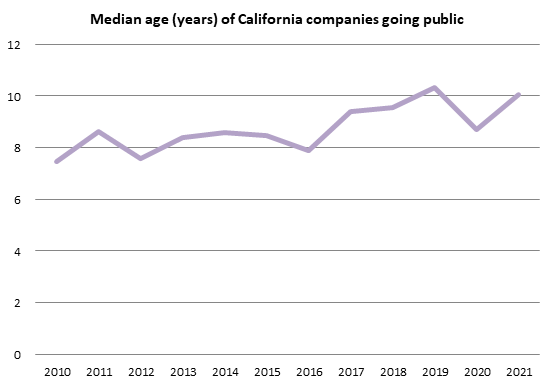 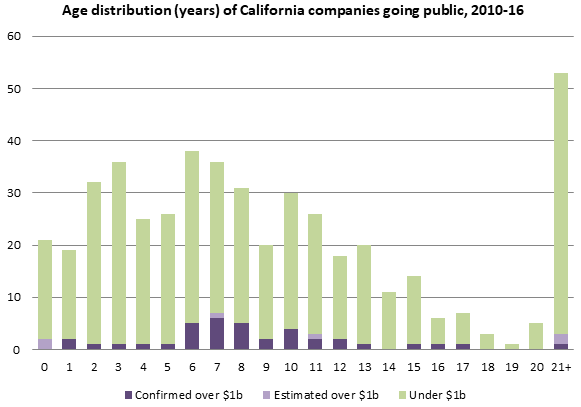 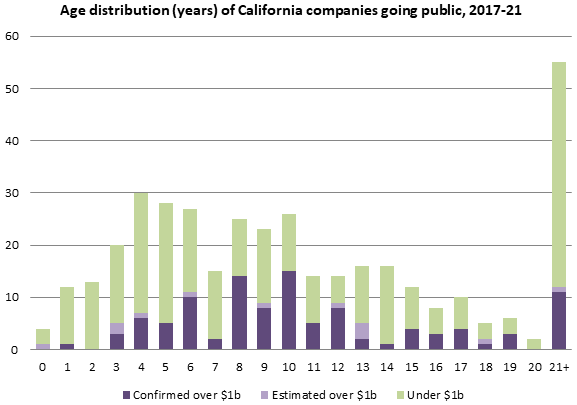 While state revenues from IPOs are highly variable and difficult to forecast, the uptick in seed funding in recent years suggests the recent increase in IPO activity could continue. As the typical public firm takes about 8 to 10 years between its founding date and its IPO date, we likely have not yet seen all or even most of the IPOs associated with the recent increases in seed funding to California firms. The big IPOs of the late 2020s are likely to come largely from firms that have received seed funding over the past few years, and the rise in seed funding suggests that VC firms continue to see promising long-term prospects for the state’s youngest firms.