Venture capital (VC) is a crucial funding source for relatively new firms in the high technology industries that create many of the state’s high paying jobs. Changes in VC funding can be a good indicator of future growth in those sectors. A recent surge in VC funding continued through the third quarter of 2021 as California firms brought in $34.4 billion of new funding, hitting a new high for the third straight quarter according to Crunchbase, a private data service. As the graph below shows, the pandemic has not disrupted the flow of VC funding to state firms and may have caused many firms that provide services that cater specifically to remote work to become more attractive VC investments. 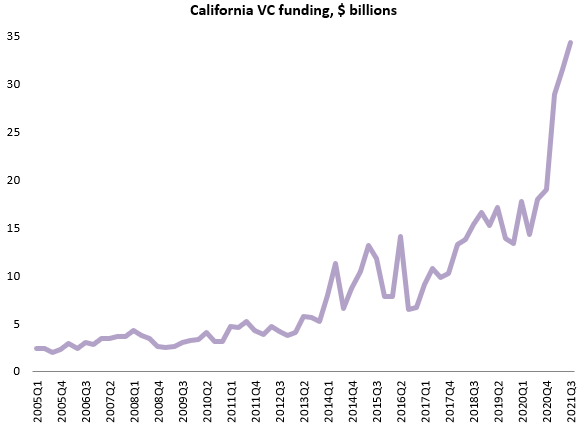 The next graph breaks down the state’s VC funding by stage. Funding for new firms that typically have no revenue yet is classified as seed stage funding. A firm’s first funding round once its business model is up and running is designated series A, its second round series B, and so on. The graph shows that funding for series D and beyond (D+) has risen even more dramatically in the last three quarters than funding for the first three rounds. Funding for series D+ tends to consist of very large investment amounts that go to relatively few firms. In the third quarter, the $15.1 billion of D+ funding was spread among just 68 firms. Seed stage funding makes up a very small fraction of total funding, and has not changed much over the past three quarters. The amounts shown on this graph do not add up to the total on the previous graph, because in some cases the series of a firm’s funding round is not known. 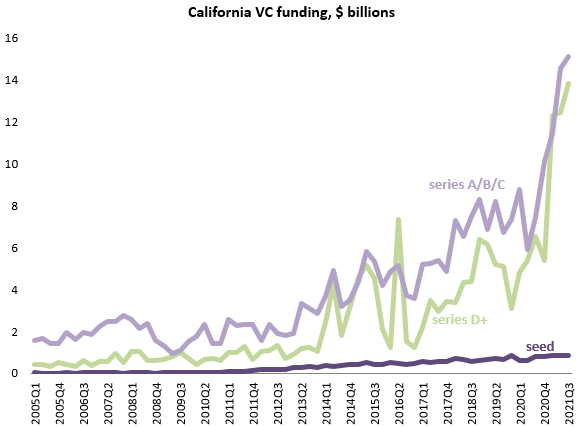 The graph below shows seed and pre-seed stage funding in isolation. In contrast to series D+, seed rounds are much smaller and spread over many more firms. In the third quarter, the $868 million of seed and pre-seed funding (a series high) was spread over 454 firms. Seed funding has generally grown steadily over the past ten years with some variance from one quarter to the next. 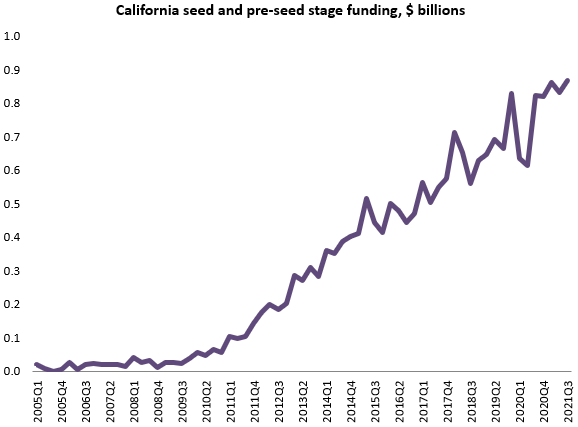