Key Jobs Report Numbers from EDD. California's Employment Development Department (EDD) has released preliminary jobs data for the month of March 2015. EDD reports that seasonally-adjusted nonfarm employment grew by 39,800 during the month of March 2014. Including a downward revision to February's job totals, nonfarm jobs in the state have increased by 481,900 (up 3.1%) during the 12 months since March 2014. The official unemployment rate, based on a federal survey of 5,500 California households, fell from 6.7% in February (when it was tied with Louisiana for third-highest in the country) to 6.5% in March. The U.S. unemployment rate stood at 5.5% in March. 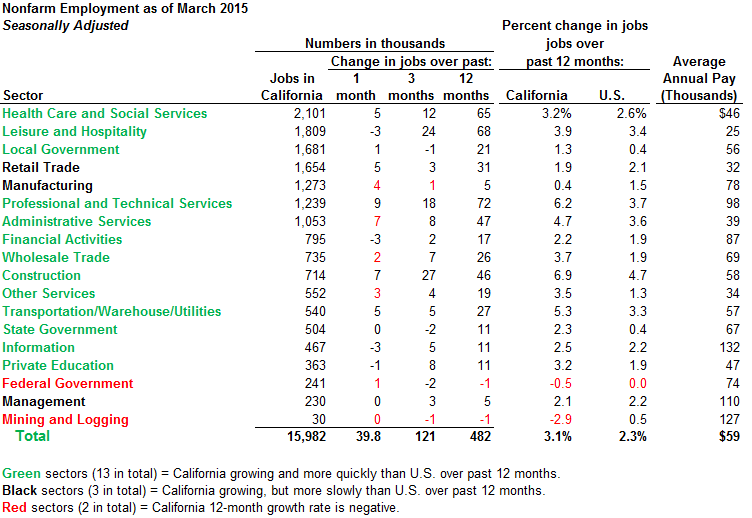 California Job Growth Outperforming Nation as a Whole. As shown above, over the 12 months ending in March, seasonally-adjusted nonfarm employment in California grew by 3.1%, versus 2.3% for the nation as a whole. According to Bureau of Labor Statistics (BLS) data, job growth in California has been strong recently compared to other states, although unemployment rates remain relatively high here. For the second month in a row, 13 of the 18 sectors we track are colored green in the figure above, meaning that California's growth rate for jobs in that sector exceeded the nation's over the past year. Three of the sectors are colored black, meaning that California's growth rate was positive, but less than the nation's. Only 2 of the 18 sectors (federal government jobs and mining and logging jobs [including oil]) are red, meaning California's jobs in that sector contracted over the 12 months ending in March. (For a description of the key nonfarm job sectors we track in the figure above, see this earlier blog post.) In addition to nonfarm employment, EDD data suggests that seasonally-adjusted farm jobs in the state, which are difficult to track given the setup of the main business survey used, declined 1.7% over the past year, a possible indication of the drought's effects on the state economy.

Continued Strength in Construction and Professional/Technical Services Sectors. As shown in the figure above, two of the strongest job growth sectors in California continue to be construction and professional and technical services. In the short run, construction is especially important for the state's economy because it often leads to growth in other "support sectors" of the economy like retail, restaurants, and health care. The strong construction job growth numbers appear to result from growth in nonresidential construction (the value of which is up 29% during the past year) and building alterations. In both the short run and the long run, growth in professional and technical services is important because this technology-heavy sector pays well and its services are sold outside the state.

Bay Area, Coastal Strength, With Higher Unemployment Rates Inland. As indicated by the EDD map below (also available here on the EDD website), California's labor market continues to be characterized by a sharp divide between low unemployment rates in many coastal communities (especially the Bay Area and the Silicon Valley) and high jobless rates in many inland areas. On a non-seasonally-adjusted basis, county unemployment rates ranged from 3.4% in San Mateo County to 20.6% in Colusa County. Seasonally-adjusted unemployment in Los Angeles County fell from 7.8% in February 2015 to 7.6% in the preliminary March 2015 data, compared to 8.6% in March 2014. 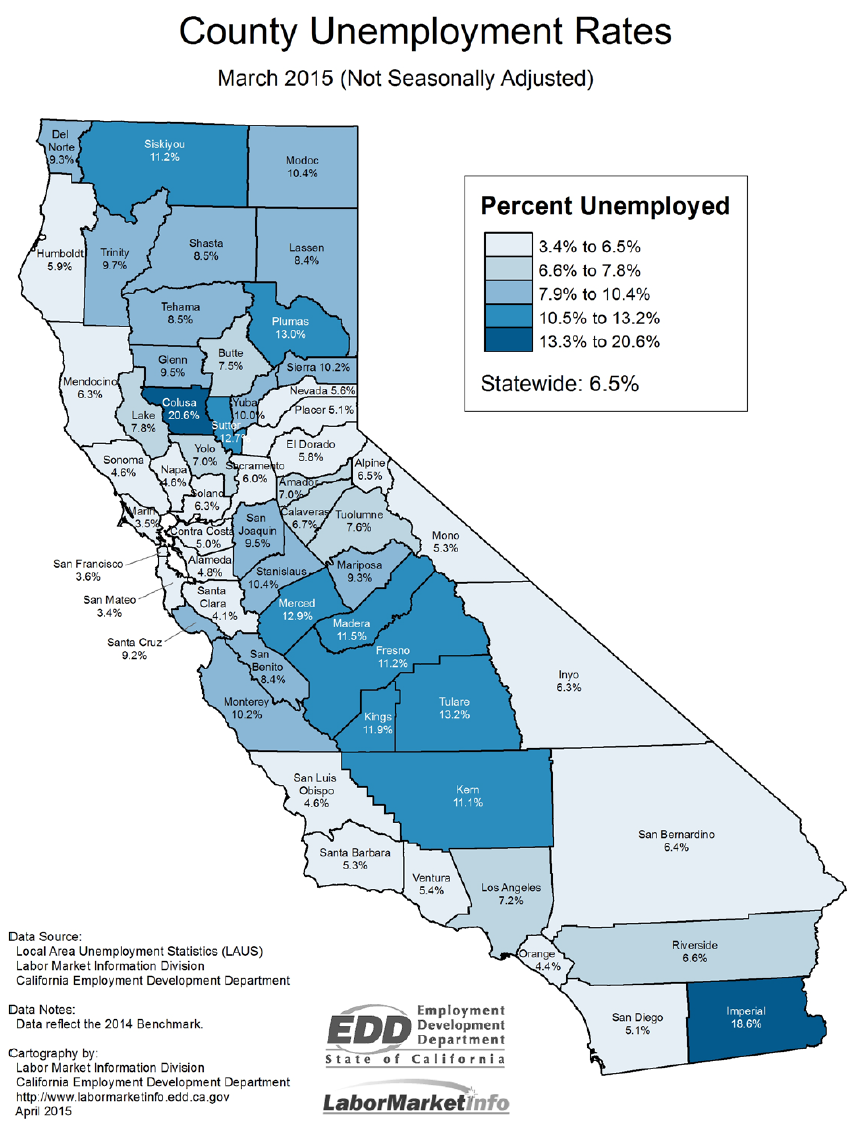 The map below (also available on the EDD website) shows a more varied picture of non-seasonally-adjusted job growth by region over the past year. Some of the largest percentage increases in nonfarm employment over the past year are in inland areas, as indicated by the lighter shades in such areas as Fresno and Merced. Also, as we have discussed recently on this blog, the Inland Empire now also ranks in the top tier of California's metro regions for year-over-year job growth. 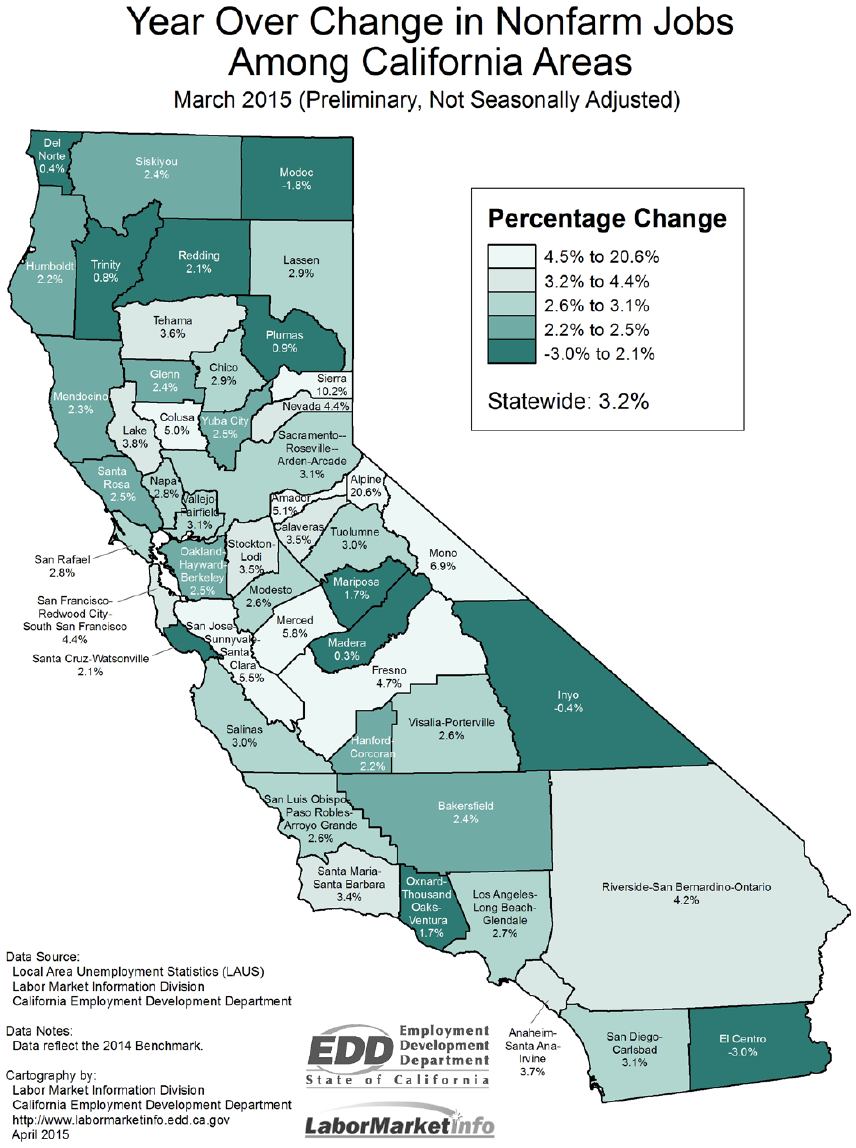 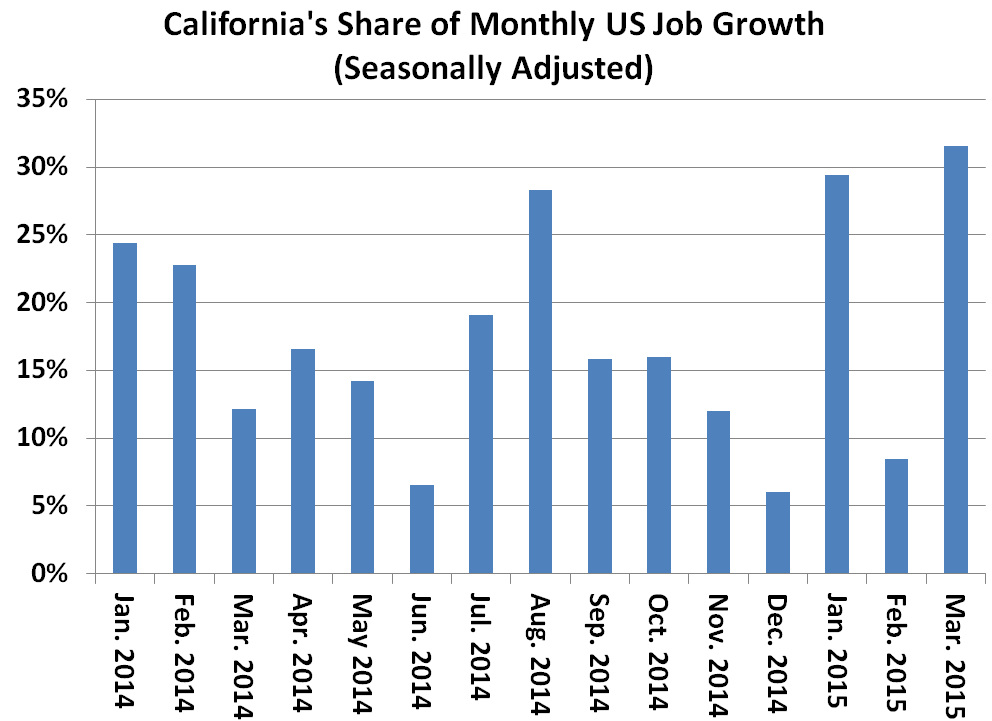 Long-Term Unemployment Continues to Fall. As shown in the graphic below from EDD's monthly California Labor Market Review, long-term unemployment in the state continues to fall. 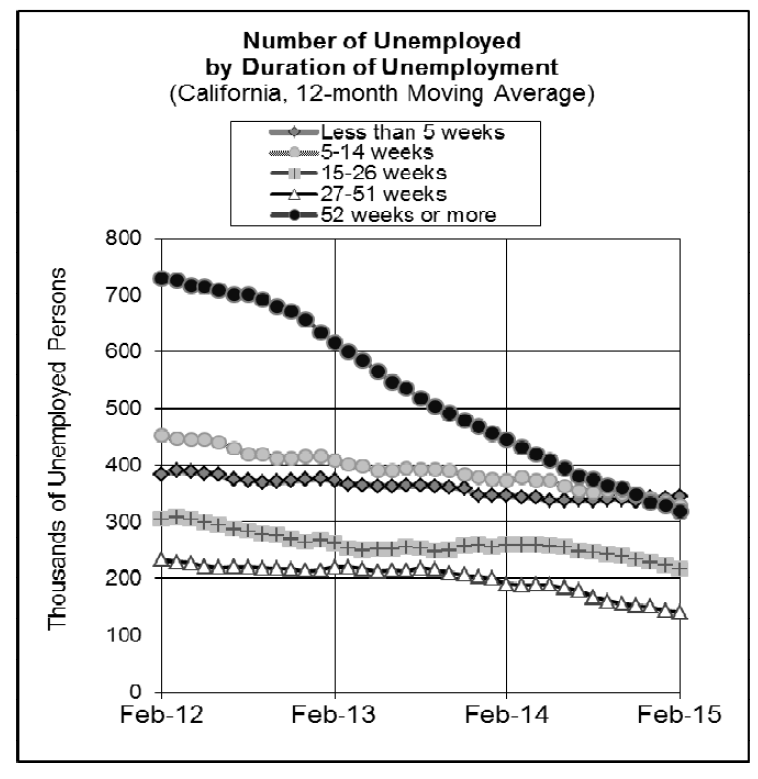 The official unemployment statistics are based on those Californians "in the labor force," including those who did not have a job, but were available for work and made specific efforts to find a job sometime during the prior 4 weeks. Based on survey data, the number of Californians "not in the labor force" who still "want a job" fell slightly by 0.4% to 862,000 over the past year, as shown below in an EDD table. The estimated number of Californians not in the labor force who were "discouraged" workers fell sharply over the past year, down 14.9% based on the 12-month moving average displayed in the EDD table. ("Discouraged workers" are defined by BLS as those not currently looking for work "specifically because they believed no jobs were available for them or there were none for which they would qualify.") About 80 percent of employed Californians usually work full time, EDD reports. The number of Californians working part time involuntarily, also known as "part time for economic reasons," has fallen 5.4% to 1.19 million over the past year.

Updated on April 21, 2015 to include long-term unemployment, not-in-labor-force, and part-time data from EDD's California Labor Market Review, as well as a link to our blog post on BLS's comparative state job report information for March 2015.