Evolution of the Budget

Each year, our office publishes the California Spending Plan to summarize the annual state budget. This publication discusses the 2018‑19 Budget Act and other major budget actions approved in 2018. In general, it reflects budgetary legislation that the Governor has signed through June 30, 2018. In some cases, as noted, we discuss budget actions approved by the Legislature after June 2018.

Discretionary General Fund Spending. In constructing the budget, the Legislature was faced with decisions over how to allocate $10 billion in discretionary General Fund resources. (“Discretionary” in this context excludes billions of dollars controlled by constitutional funding requirements, such as Proposition 98 [1988] and Proposition 2 [2014], and added costs to maintain existing policies and programs.) Figure 2 shows how the June 2018 budget package allocated these discretionary resources among reserves, one‑time spending, and ongoing spending. As the figure shows, the budget allocates the vast majority of discretionary resources to reserves and one‑time spending. This allocation includes proposals made by the Governor in January and May, which were later approved by the Legislature, as well as legislative choices made in putting together the final budget package. As discussed later in this publication, the largest one‑time spending actions in the budget include: nearly $700 million in additional discretionary funding for the universities, $630 million to replace the State Capitol Annex, $500 million for emergency homeless aid block grants, and nearly $300 million to repay local government mandates related to children’s mental health. 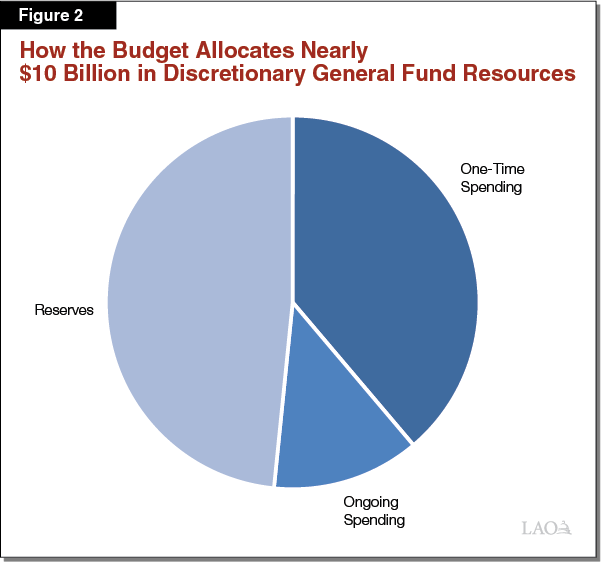 Budget Commits About $1.5 Billion in Ongoing Spending. While the budget package emphasizes building more reserves and one‑time spending, it does make some ongoing spending commitments. These ongoing commitments carry a cost of about $1.2 billion in 2018‑19, growing to $1.5 billion annually thereafter. The largest out‑year increase is for CalWORKs cash grants. The budget dedicates $90 million in 2018‑19 to increase these grants beginning in April 2019, but the full‑year cost of these increases is $360 million. The budget also dedicates about $348 million to the universities on an ongoing basis and $139 million to increase salaries for correctional officers.

Figure 3 displays the administration’s revenue projections as incorporated into the June 2018 budget package. The administration projects the state will collect $133 billion in General Fund revenues and transfers in 2018‑19, a 3 percent increase over revised 2017‑18 estimates. The state’s largest three General Fund taxes—the personal income tax, sales and use tax, and corporation tax—are projected to increase 4 percent.

Figure 4 summarizes the condition of the General Fund under the revenue and spending assumptions in the budget package, as estimated by the Department of Finance (DOF). This shows that estimated state General Fund available resources ($141.8 billion) exceed total General Fund expenditures ($138.7 billion).

Budget Package Assumes 2018‑19 Ends With Nearly $16 Billion in Reserves. Figure 4 shows the budget package assumes that 2018‑19 will end with $15.9 billion in total reserves. Under current revenue estimates, the budget package deposits enough money into the Budget Stabilization Account (BSA), the state’s constitutional rainy day fund, so that it reaches its maximum level of $13.8 billion (10 percent of General Fund tax revenues). To reach this maximum level, the budget includes a $2.6 billion optional deposit in addition to the deposit required under the Constitution.