Evolution of the Budget

The 2018‑19 budget provides $14.3 billion from the General Fund for judicial and criminal justice programs, including support for program operations and capital outlay projects, as shown in Figure 26. This is an increase of $616 million, or 4.5 percent, above the revised 2017‑18 General Fund spending level.

In addition, the budget includes a $48.2 million reduction in General Fund support for trial court operations in 2018‑19 in order to reflect the availability of property tax revenue in accordance with Control Section 15.45 and Section 2578 of the Education Code. Such funds are remitted to the state by counties that collect more property tax than state law allows them to spend on education.

The budget also appropriates $15 million from the Trial Court Trust Fund on a one‑time basis to support start‑up costs associated with the implementation of the state’s new pretrial process as required by Chapter 244 of 2018 (SB 10, Hertzberg). The budget specifies that the funds will be reimbursed by the General Fund in 2019‑20.

Capital Outlay. The budget provides $1.3 billion for various trial court construction projects. This amount includes $32.2 million from the Immediate and Critical Needs Account (ICNA) for the pre‑construction design activities for three projects. The budget also provides $1.3 billion in lease revenue bond authority for the construction of ten projects, as shown in Figure 27. The annual debt service on these bonds will be paid from the General Fund instead of ICNA. (ICNA receives revenue from certain court fee and fine increases to fund trial court facility projects.) The budget package also requires Judicial Council to reassess its trial court facility needs by December 31, 2019.

The budget act provides $11.9 billion from the General Fund for support of the California Department of Corrections and Rehabilitation (CDCR). This is a net increase of $271 million, or 2 percent, above the revised 2017‑18 level of spending. This increase primarily reflects additional costs related to (1) Hepatitis C treatment for inmates, (2) the replacement of radio equipment in CDCR facilities and vehicles, and (3) prison roof replacements and mold remediation. This additional spending is partially offset by various spending reductions, including reduced spending for contract beds due to a decline in the inmate population.

Adult Correctional Population. Figure 28 shows the recent and projected changes in the inmate and parolee populations. As shown in the figure, the prison population is projected to decline slightly from about 128,500 inmates at the end of 2017‑18 to about 126,300 inmates by the end of 2018‑19. The parole population is projected to increase slightly from about 47,500 to about 49,200 parolees by the end of 2018‑19. These trends are primarily due to the estimated impact of Proposition 57 (2016), which made all nonviolent offenders eligible for release consideration, expanded CDCR’s authority to award sentencing credits to inmates, and requires that judges decide in all cases whether juveniles should be tried in adult court. 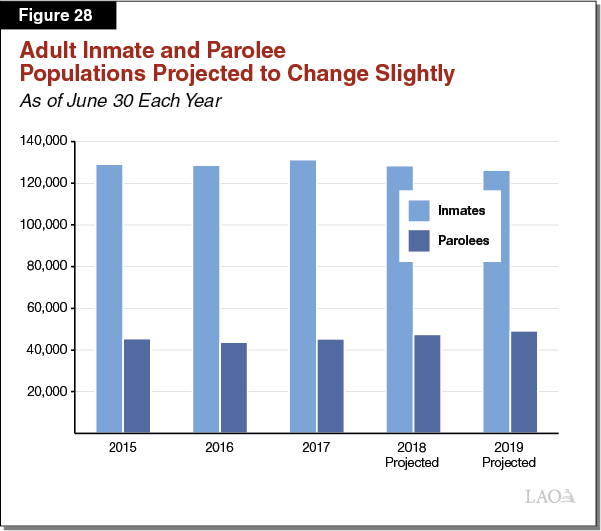 Inmate Health Care. The budget includes $3.2 billion from the General Fund for inmate health care. This includes the following augmentations: (1) $105.8 million on a limited‑term basis to increase the number of inmates with Hepatitis C that receive treatment, (2) $20.1 million to implement various strategies intended to improve how the department manages mental health beds, (3) $18.1 million on a limited‑term basis to increase payments to contract psychiatrists who provide services when civil servants are unavailable, (4) $10.8 million to provide health care services in reentry facilities, and (5) $8.3 million for additional costs to implement the Electronic Health Record System.

Equipment and Roof Repairs. The budget includes various General Fund augmentations to purchase equipment and repair roofs. This includes $72.3 million to replace roofs as well as to address mold damage at various institutions. The budget also includes $32.9 million for CDCR to replace public safety radio system infrastructure used at several institutions and by the statewide inmate transportation unit. In addition, the budget includes $17.5 million to purchase vehicles that are primarily used to transport inmates to receive health care.

Rehabilitation Programs. The budget provides $16.8 million in additional support for rehabilitation programs. This includes (1) $8.3 million (General Fund) to increase the availability of career technical education programs and (2) $4 million (Inmate Welfare Fund) to support innovative programming grants on an ongoing basis. The budget also provides $2.1 million from the General Fund for CDCR to establish the Ventura Training Facility, which will provide firefighter training and certification for about 80 parolees. The budget also provides $2 million to the Department of Forestry and Fire Protection and $3.5 million to the California Conservation Corps to support the training center.

Division of Juvenile Justice (DJJ). Legislation approved as part of the budget package allows DJJ to house more juvenile and adult court youth in order to reduce the number of such youth housed in adult prison. For example, the legislation authorizes DJJ to operate a seven‑year pilot program to house certain adult court youth who can serve their entire sentences in DJJ if they are able to complete them before turning age 25. The budget includes $2.1 million from the General Fund to support this new workload.

Other Budget Adjustments. The budget includes various other augmentations from the General Fund to support CDCR operations. These include (1) $16.5 million to pay for overtime worked by custody staff, (2) $13.5 million to reduce the inmate caseload for Correctional Counselors, (3) $12.9 million to expand training for employees, (4) $10.3 million to increase custody staffing primarily related to medical guarding and transportation, (5) $9.1 million to implement a two‑year contraband interdiction pilot program, and (6) $8.2 million for additional costs to provide janitorial services at the Correctional Health Care Facility in Stockton.

Forensics Workload. The budget includes a total of $18.9 million in one‑time General Fund support for various forensics‑related workload. First, the budget provides $6 million to backfill an additional decline in criminal fine and fee revenue available to support DOJ’s Bureau of Forensics Services (BFS) and $5.4 million to replace BFS laboratory equipment. Second, the budget provides $6.5 million to help counties and cities address the backlog of unprocessed sexual assault evidence and $1 million to inventory the total amount of unprocessed evidence in the state.

Other Budget Adjustments. The budget includes (1) $11.1 million (Ammunition and Safety Enforcement Special Fund) for the regulation of ammunition and firearms and (2) $10 million one time (General Fund) to implement a tier‑based sex offender registry as required by Chapter 541 of 2017 (SB 384, Wiener and Anderson).

Board of State and Community Corrections (BSCC). The budget includes various one‑time General Fund augmentations for new grant programs to be administered by BSCC. This includes (1) $50 million for community‑based organizations that provide housing services to formerly incarcerated individuals, (2) $37.3 million to provide services to youth in lieu of punishment such as jail (commonly referred to as “diversion programs”), and (3) $28.2 million to assist counties with a temporary increase in the population supervised by county probation departments due to the release of prison inmates as a result of Proposition 57.

Commission on Peace Officer Standards and Training (POST). The budget includes a one‑time $25 million General Fund augmentation to POST for law enforcement training activities: (1) $15 million for use of force and de‑escalation training, (2) $5 million for crisis mental health training, and (3) $5 million to provide competitive grants for innovative trainings or procedures that could reduce officer‑involved shootings.