(Update 5/29/19: For our comments on changes to health realignment, see our consolidated post: Updates to the Governor's 1991 Realignment Proposals.)

Overview. The Governor’s May Revision includes Medi-Cal spending of $19.7 billion from the General Fund ($93.4 billion total funds) in 2018‑19 and $23 billion from the General Fund ($102.2 billion total funds) in 2019‑20. As shown in Figure 1, the May Revision reflects a net decrease of about $850 million (General Fund) combined across 2018‑19 and 2019‑20, relative to previous estimates released in January. As will be described in more detail below, about half of the reduction in estimated spending in 2018‑19 reflects a shift of costs in Medi-Cal to a different budget item, rather than a true reduction in estimated program costs. After accounting for this shift, the May Revision is about $350 million below January estimates across 2018‑19 and 2019‑20.

Below, we describe the major factors that contribute to adjustments to estimated General Fund spending in 2018‑19 and 2019‑20 in the May Revision.

Background. For several years, the state has imposed a tax on managed care organizations (MCOs) that leverages significant federal funding. In combination with a package of associated tax changes, the existing MCO tax package generates a net General Fund benefit of around $1.5 billion. Under state law, the MCO tax package expires at the end of 2018‑19. Extending the MCO tax past 2018‑19 would require statutory reauthorization from the Legislature and approval from the federal government. Based on the recent federal approval of a similar tax in Michigan, we believe federal approval of a reauthorized California MCO tax package is likely. For more information, see our recent report, The 2019‑20 Budget: Analysis of the Medi-Cal Budget.

As we describe in our report, The 2019‑20 Budget: Analysis of the Carve Out of Medi-Cal Pharmacy Services From Managed Care, Governor Newsom signed an executive order to transition—by January 2021—the pharmacy services benefit in Medi‑Cal from managed care to entirely a fee-for-service benefit. A principal rationale for the transition is to generate General Fund savings. At the time of the Governor’s budget, however, the administration did not release a precise fiscal estimate of the General Fund savings under the transition. The May Revision includes an estimate of $393 million in annual General Fund savings that would be realized by 2022‑23. The administration has released detail on the fiscal estimate that identifies some of the major assumptions behind the estimate. Since no legislative action needs to be taken for the 2019‑20 budget, we plan to assess the fiscal estimate for both reasonableness and to better understand the impacts of the transition on major Medi-Cal stakeholders in the coming weeks or months.

Earlier this year, we provided our assessment of the Governor’s proposal to (1) provide increased staff at DHCS to improve the department’s ability to track cash flows and reconcile Medi-Cal spending to budget projections and (2) create a special fund to smooth the impact of drug rebates on the Medi-Cal budget. In the May Revision, the Governor’s staffing proposal is unchanged, but the Governor proposes depositing $172 million in the drug rebate special fund.

Lack of Transparency and Large, Unanticipated Budget Adjustments a Significant Concern. As we noted earlier this year, significant, unanticipated changes to the Medi-Cal budget have become routine. For example, the May Revision reflects a $3.3 billion reduction in estimated General Fund spending in 2018‑19 compared to the 2018‑19 Budget Act approved last June. Figure 2 shows the amounts by which Medi-Cal estimates from the annual budget act were later adjusted in recent years. Considering the Medi-Cal program is a major General Fund expenditure, large, unanticipated budget adjustments in Medi-Cal can interfere with the Legislature’s ability to formulate and pursue longer-term fiscal plans in alignment with its priorities. Complexity and lack of transparency in the Medi-Cal budget also creates challenges for the Legislature to independently oversee operations of the program. 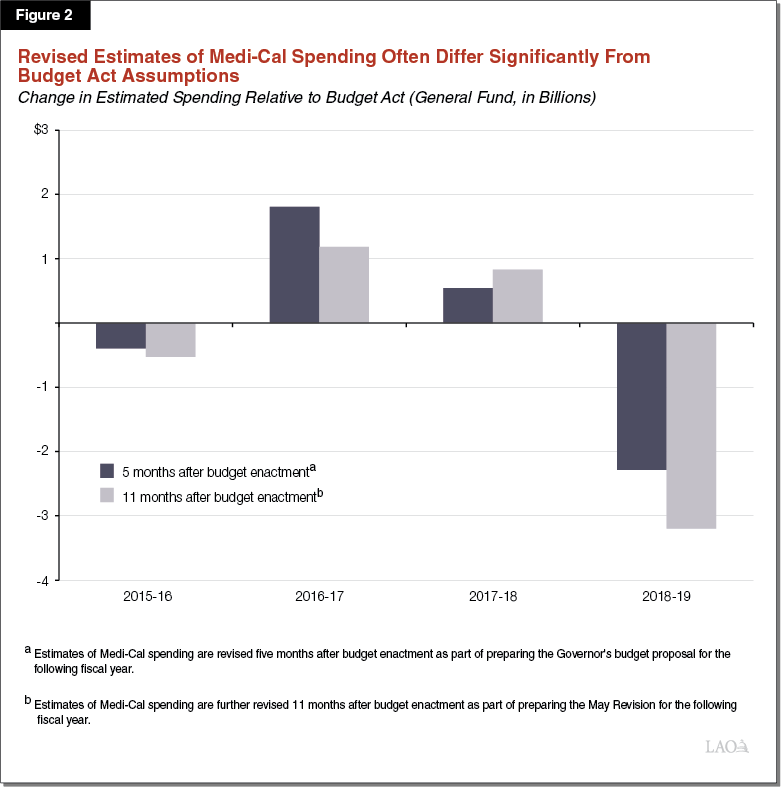 Recommendations. In addition to continuing to recommend the approval of the Governor’s staffing proposal and the creation of the drug rebate special fund, we recommend that the Legislature take the following actions:

As we describe below, the Governor’s May Revision proposes a variety of major changes to the use of Proposition 56 funding in Medi-Cal over the next several years. 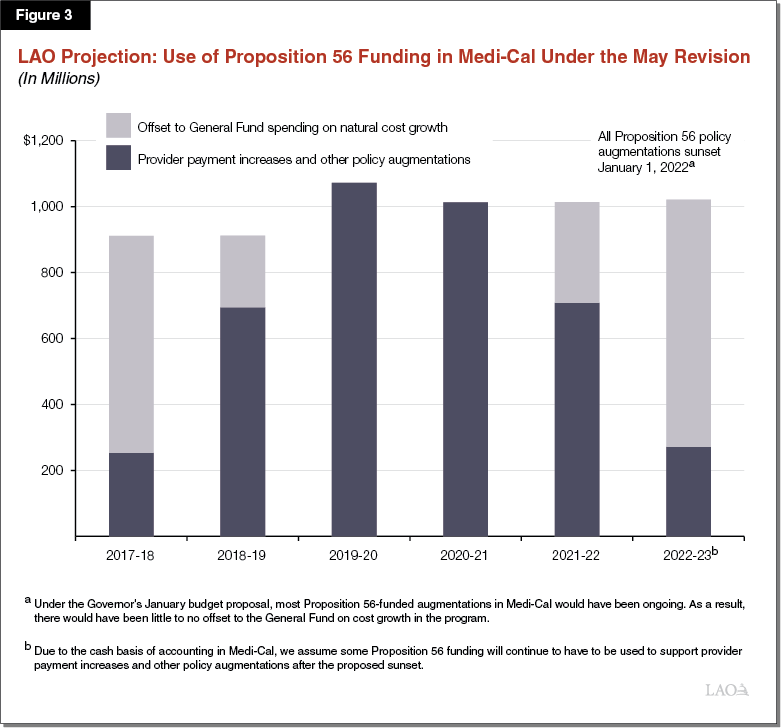 Restores Optician and Optical Lab Services. In addition to the above one-time augmentations and the other augmentations and extensions proposed in January, the May Revision proposes using $11 million in Proposition 56 funding to restore optician and optical lab services in Medi-Cal—benefits which were cut during the recession in 2009. The restoration would be effective no sooner than January 1, 2020. As with all other Proposition 56 augmentations, however, the restoration would be eliminated as of January 1, 2022.

. . . Sunsetting the Provider Payments for Fiscal Management Reasons Raises Concerns. As we note in our office’s Initial Comments on the Governor’s May Revision, the Governor sunsets a variety of budget-year proposals in order to maintain a balanced budget through the forecast period ending in 2022-23. We raise a number of concerns with the Governor’s approach, finding that the May Revision understates the true ongoing cost of its policy commitments.

As we describe in this section, we have outstanding questions about the cost-effectiveness of the administration’s approach for many of the value-based payments being proposed.

DHCS Plan to Strengthen Oversight of Clinical Outcomes in Medi-Cal Managed Care. Recently, the administration released a plan (and an associated funding proposal) to significantly increase its oversight over the quality of care that Medi-Cal managed care plans deliver to their members. (Around 80 percent of Medi-Cal beneficiaries are enrolled in managed care.) These efforts include holding managed care plans accountable for meeting significantly higher standards on a variety of performance measures related to clinical care. These performance measures include, for example, the proportion of children receiving recommended preventive “well child” visits and the proportion of children who have received all recommended vaccinations. Failure to meet these higher Medi-Cal standards is to result in Medi-Cal managed care plans being placed on corrective action plans and, potentially, immediate sanction. To help Medi-Cal managed care plans meet these higher standards, it is likely that the state will have to increase capitation funding for plans.

Value-Based Payment Program Has Significant Overlap With Measures That Managed Care Plans Will Be Accountable to Improve . . . Figure 4 shows that the proposed Proposition 56 value-based payment program would provide supplemental payments for many of same measures for which Medi-Cal managed care plans are being held accountable and likely funded through capitation to significantly improve. In one case, the value-based payment program would offer supplemental payments for activities (well-child visits) for which physicians already receive Proposition 56 supplemental payments.

Legislature Could Consider Scaling Back Value-Based Payment Program to Account for Overlap. We strongly agree with the administration’s goal of improving the quality of care in Medi-Cal. In particular, we support the administration’s efforts to improve the quality of care through strengthened oversight of Medi-Cal managed care given that (1) 80 percent of Medi-Cal beneficiaries are in managed care and (2) that holding plans accountable for meeting high standards of care through the use of corrective action plans and sanctions reflects a prudent approach to improving outcomes. In light of these parallel quality improvement efforts, the Legislature could consider scaling back funding for the value-based payment program in areas where there is significant overlap with managed care quality improvement efforts. Any freed up funding could be used to (1) support other provider payment increases, (2) offset General Fund spending on cost growth in Medi-Cal, or (3) held in reserve. This latter option could help prevent the state from having to eliminate all Proposition 56 augmentations midway through 2021-22 to forestall a budget deficit, as is proposed in the May Revision.

The May Revision maintains the Governor’s proposal to expand full-scope Medi-Cal coverage to undocumented adults ages 19 through 25. The updated May budget proposes to make two significant revisions to the January proposal. Figures 5 and 6 summarized how the General Fund costs of the expansion have been revised between the January budget and the May Revision.

Moves Back Implementation Date From July 1, 2019 to January 1, 2020. The May Revision moves back implementation of the expansion from July 1, 2019 to January 1, 2020, resulting in one-time General Fund savings relative to the January budget of about $100 million in 2019-20. We believe half-year implementation makes sense in light of the administrative activities that DHCS will have to undertake to effect the transition to full-scope coverage.

(Update 5/29/19: For our comments on changes to health realignment, see our consolidated post: Updates to the Governor's 1991 Realignment Proposals.)