California Nonfarm Payroll Jobs Up by 54,200 in May. On June 19, 2015, as our office was focused on the state's 2015-16 budget package, the state's Employment Development Department (EDD) released California's May 2015 jobs report. Nonfarm payroll jobs increased by 54,200 during May, EDD reported, as the official unemployment rate rose slightly to 6.4% due in part to more workers being counted in the state's labor force. As shown below, California's job growth rate over the past 12 month has outpaced the U.S. as a whole in 15 of the 18 nonfarm job sectors we track. In addition, payroll jobs in California's agriculture sector, which are more difficult to track than nonfarm jobs, declined 0.7% over the past year, EDD reported. 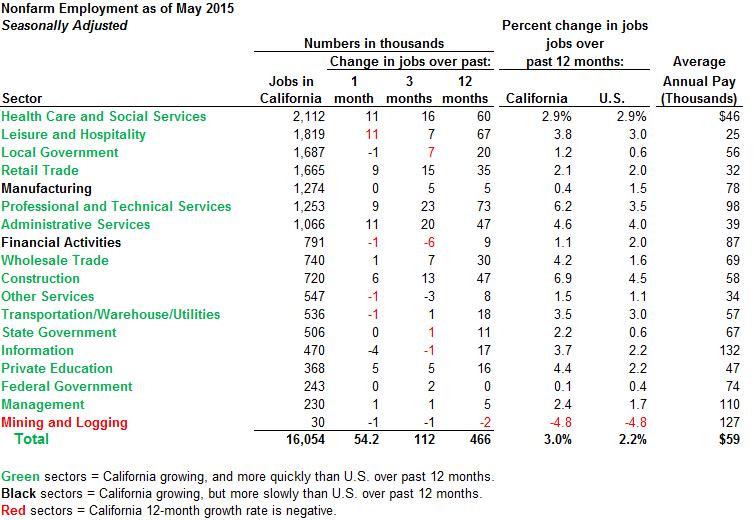 As shown above, California's job picture continues to be one of broad-based growth, led in particular by the construction sector and the high-paying jobs of the professional and technical services sector. Within the latter sector, EDD data shows that the computer systems service category is the one with the largest growth over the past year.

San Jose and Inland Empire Rank #1 and #2 Among Large Metros in Job Growth Over Past Year. Today, BLS released May 2015 jobs data for metropolitan regions across the country. Of the 51 metro areas with a population of 1 million or more, the San Jose-Sunnyvale-Santa Clara region (Santa Clara and San Benito Counties) had the highest nonfarm job growth rate over the past year by far at 5.7% (not seasonally adjusted). The Inland Empire region (Riverside and San Bernardino Counties) had the second-highest nonfarm job growth rate among these large metros with 4.05% job growth over the past year, narrowly outpacing the Orlando metro area in Florida with its 3.97% job growth rate. The San Diego region (San Diego County) ranked 10th among the 51 large U.S. metros with 3.15% job growth over the past year. The San Francisco-Oakland-Hayward metropolitan statistical area (MSA) consisting of San Francisco, San Mateo, Alameda, Contra Costa, and Marin Counties ranked 16th with a 3.04% job growth rate. The combined Los Angeles/Orange County MSA and the Sacramento regions ranked near the middle of the 51-area list with 2.6% job growth rates over the past year.

Maps Displaying May Jobs Data by Region. Below is an EDD map comparing job growth rates over the last 12 months by region across California. The lighter the color in the map below, the faster the job growth rate over the past year. 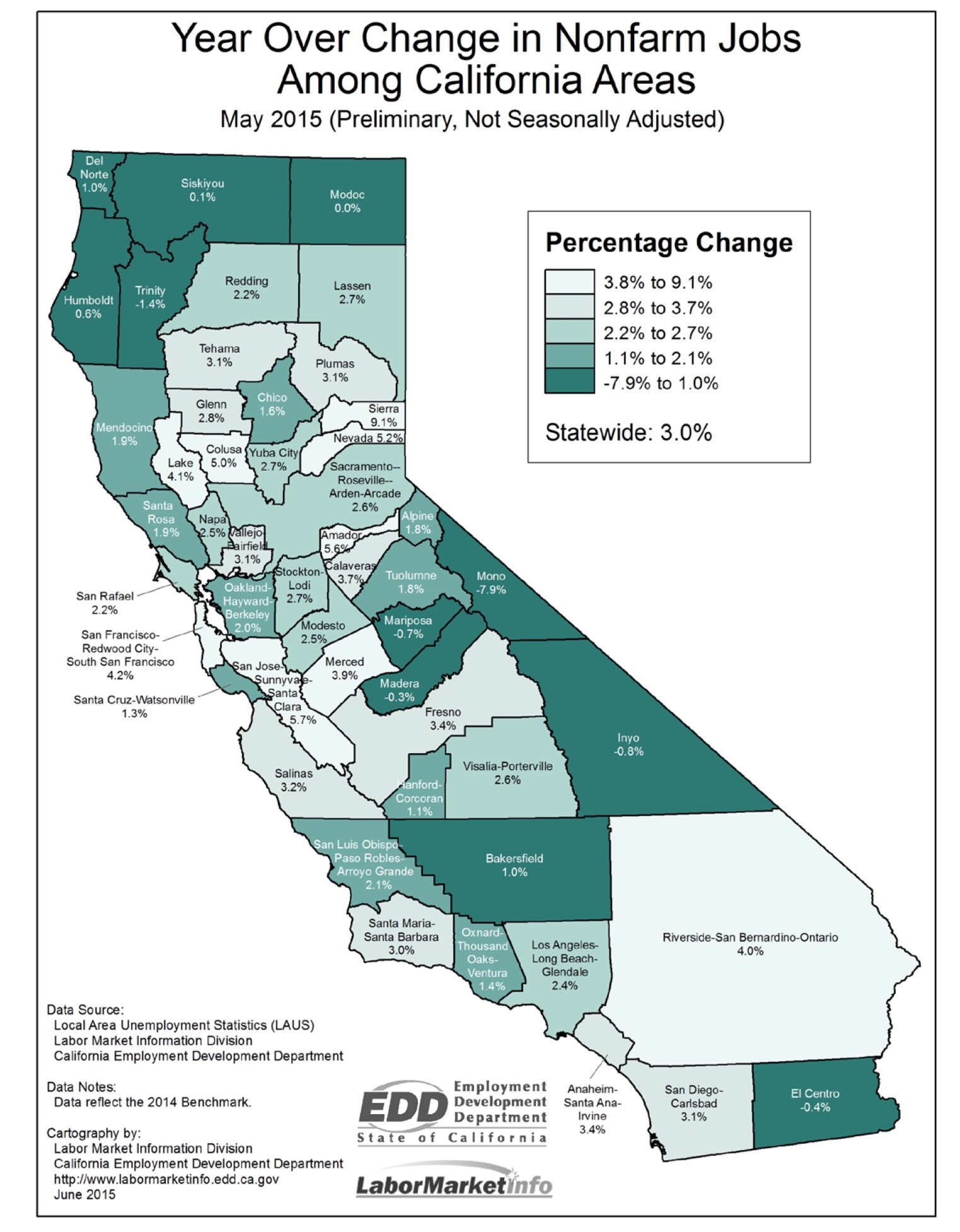 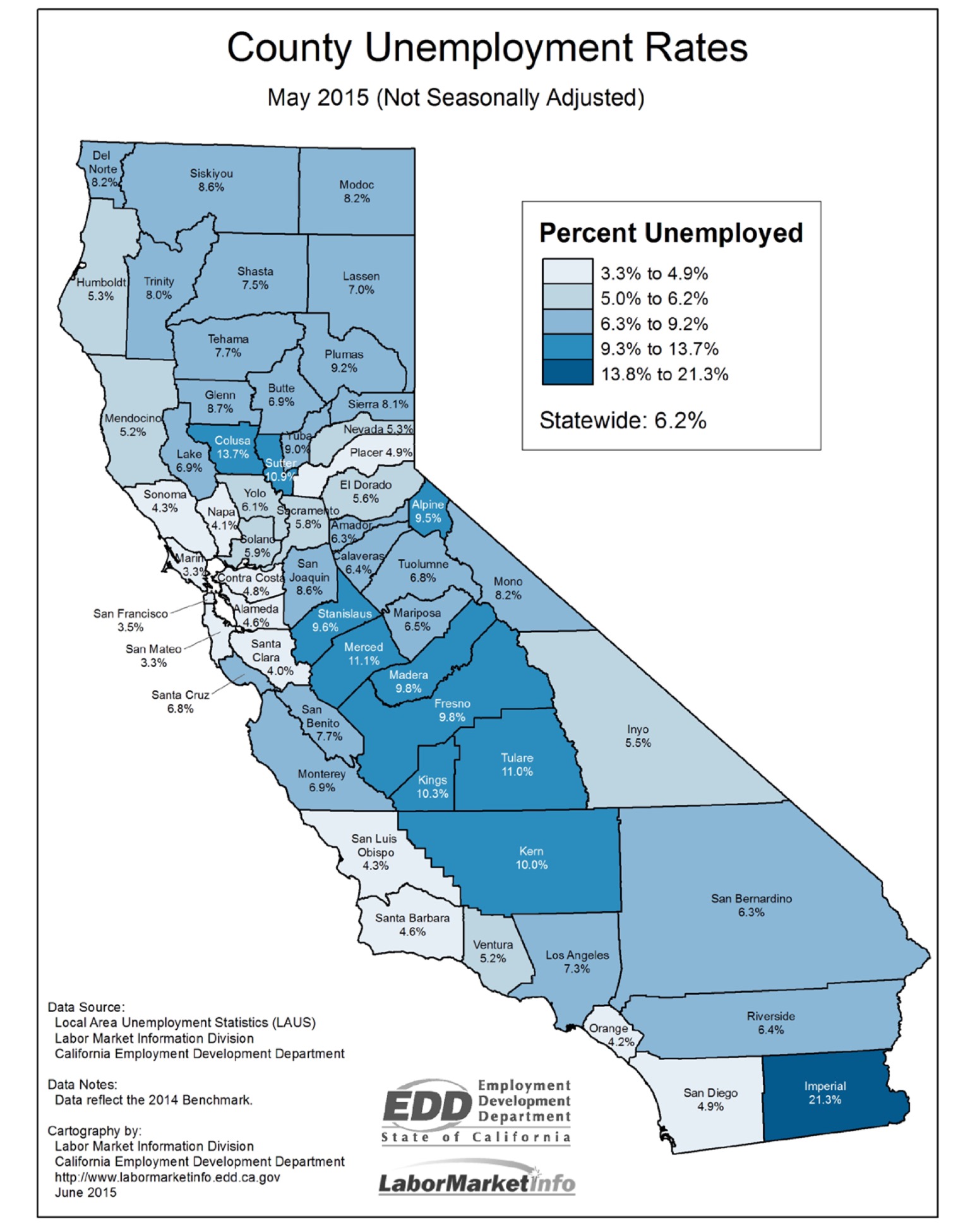 Seasonally-Adjusted Data: Job Growth by California Metro Area Over Past Year. Below is a table that, with a few exceptions, displays seasonally-adjusted job growth data by California MSA or metropolitan division (a subcomponent of some large MSAs) over the past year. (This data often differs somewhat from the metro data discussed above, which BLS tends to communicate on a non-seasonally adjusted basis.) 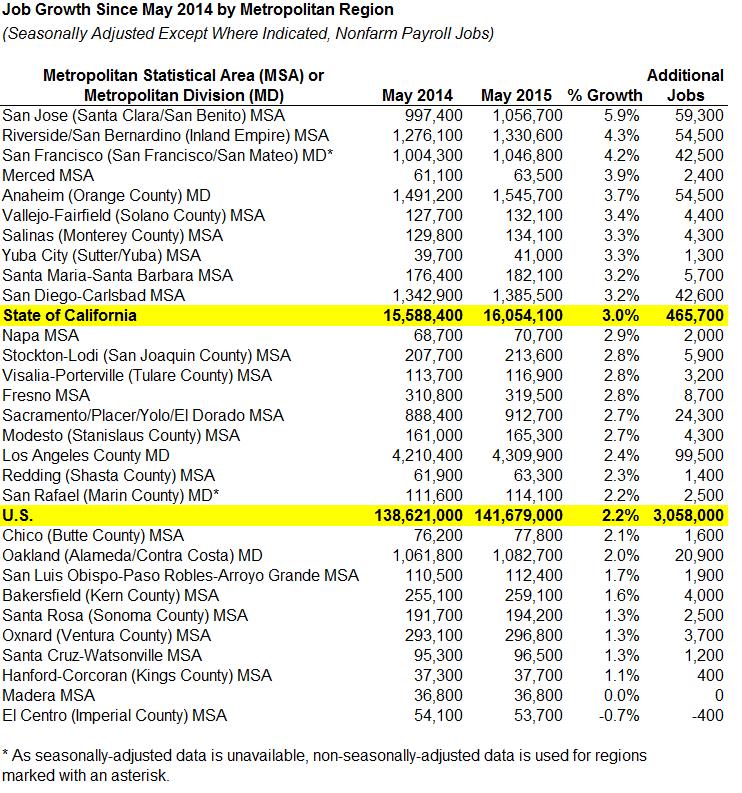