...While Corporation Taxes Fell Short of Projections. Net corporation taxes were $93 million below the administration's monthly projection, due principally to higher-than-projected refunds. (Refunds generally are booked in the budget act as a reduction to the prior year's annual budgetary revenue under the state's accrual protocols.)

Year-to-Date "Big Three" Revenues $869 Million Above Projections. For the 2015-16 fiscal year to date, through the end of October, the "Big Three" General Fund tax sources combined are running $869 million above the administration's projections, as shown below. (This is an improvement from one month ago.) 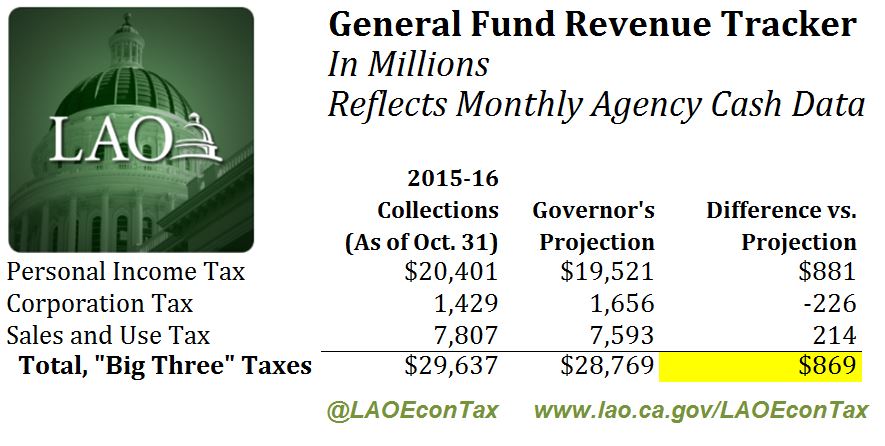 The agency cash data above is used for tracking monthly budgetary revenues compared to the projections in the annual state budget. The principal document for tracking monthly revenues, the Department of Finance's Finance Bulletin, will be released in the coming weeks and will include data concerning other revenues, including possible revisions to the preliminary income and sales tax data above.

The next updates of our office's General Fund revenue outlook are expected to be released on or about Wednesday, November 18 in the annual LAO Fiscal Outlook publication.