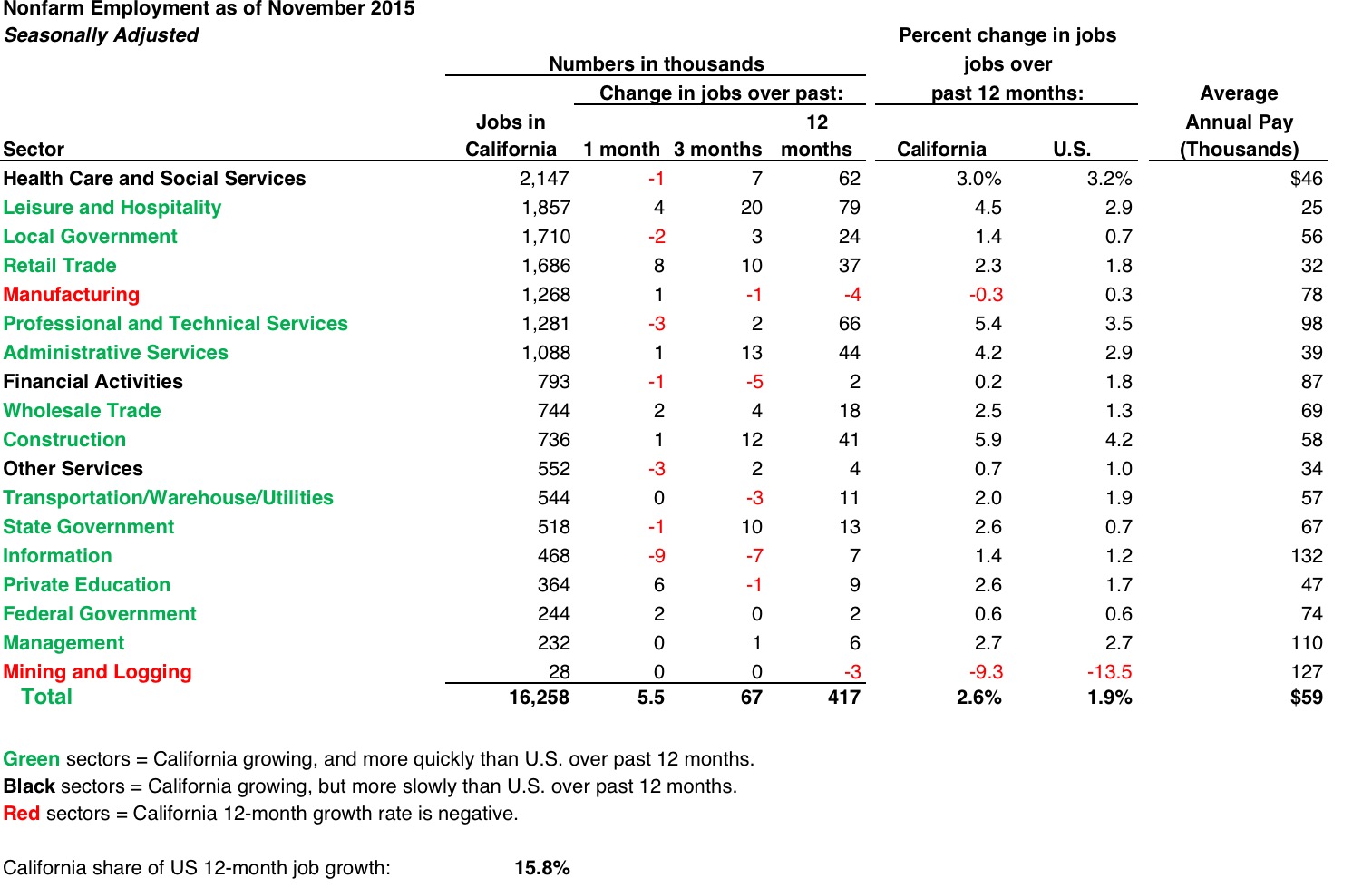 Mediocre Monthly Jobs Report...Longer-Term Trend Still Healthy. Monthly jobs reports are subject to later revision and can be volatile. While it is important not to make too much of any single month's jobs report, the minimal seasonally-adjusted job growth of 5,500 reported in November's preliminary data is disappointing. It is far below the average monthly job growth in the state over the past year, which has placed the state's job growth rate as 7th highest among the 50 states during that period. That being said, the longer-term trend of job growth since the recession continues.

Some Key Sector Data. On a seasonally-adjusted basis, retail trade and private education were the only sectors with job growth of 5,000 or more in November. Jobs in the information sector were down a noteworthy 9,300 on a seasonally-adjusted basis, due apparently to a decline in motion picture industry jobs (a very volatile sector in the data) in Los Angeles County. The professional and technology services sector, key to the state's recent growth, saw a small seasonally-adjusted decline, as the Bay Area and the Silicon Valley experienced slower November job growth as compared to the same month in recent years.

Unemployment and Labor Force Data. The state's official unemployment rate dropped again to 5.7% with statewide seasonally-adjusted employment growing and the number of those actively participating in the state's labor force (by working or looking for work recently) declining. Notably, the seasonally-adjusted unemployment rate in Los Angeles County fell to under 6% (specifically, coming in at 5.9%). This is the first time that Los Angeles County's official jobless rate has been below 6% since 2007.

As show in the EDD map below (also available here), much of inland and northern California continues to have higher unemployment rates than coastal California. On a county-by-county basis, unemployment rates ranged from 3.1% in San Mateo County to 20.4% in Imperial County. 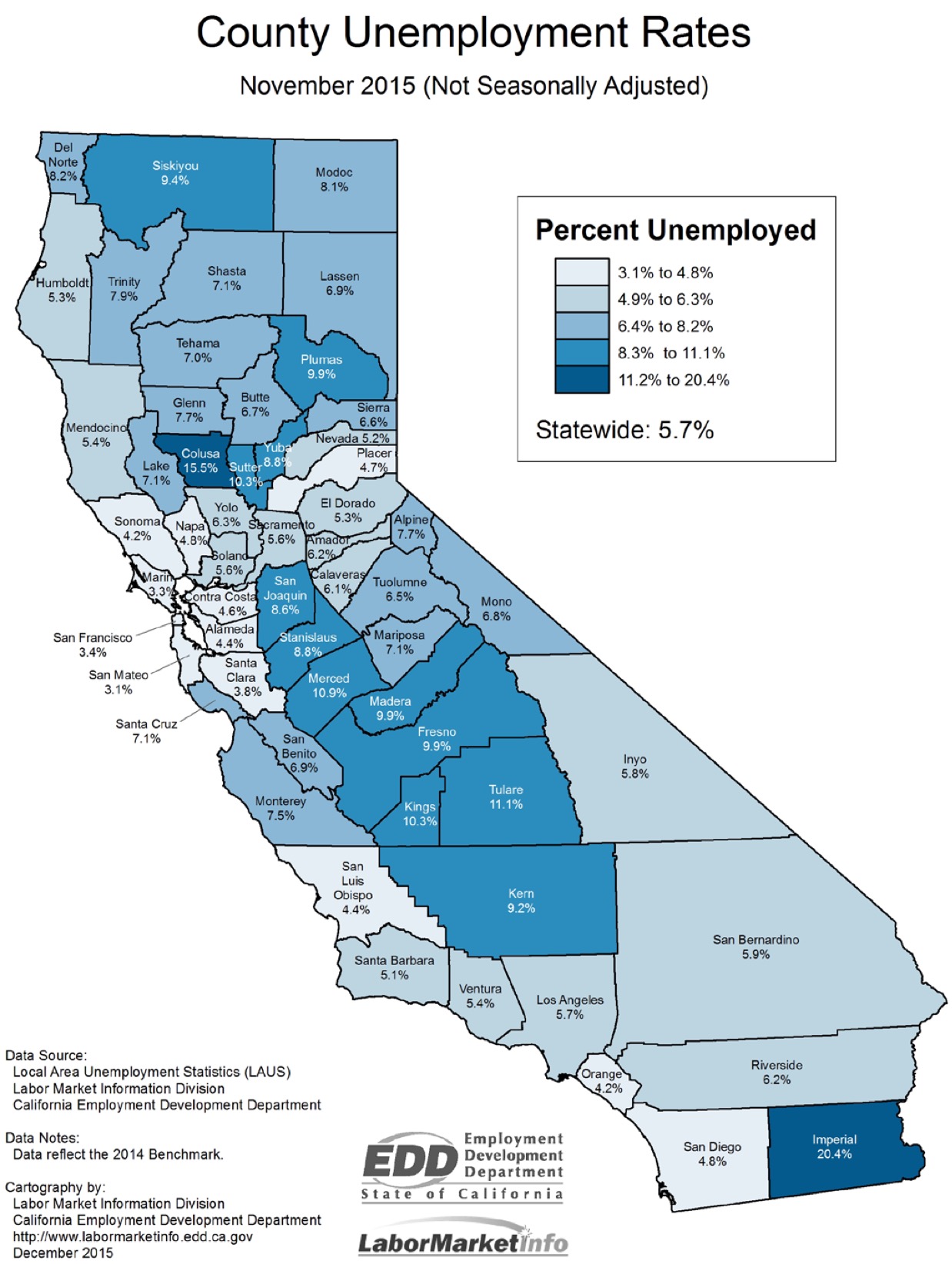 Job Growth by Region. Job growth rates over the past year also have been higher in parts of coastal California (especially the Silicon Valley and the western part of the Bay Area) than in much (but not all) of inland and northern California, as shown in the EDD map below (also available here). In November, the number of nonfarm jobs grew on a non-seasonally adjusted basis in Kern County, which is promising given the declines in the oil sector there over the past year. Meanwhile, the preliminary 1,400 nonfarm job increase in Fresno County was the biggest November jobs bump that area has recorded in years. 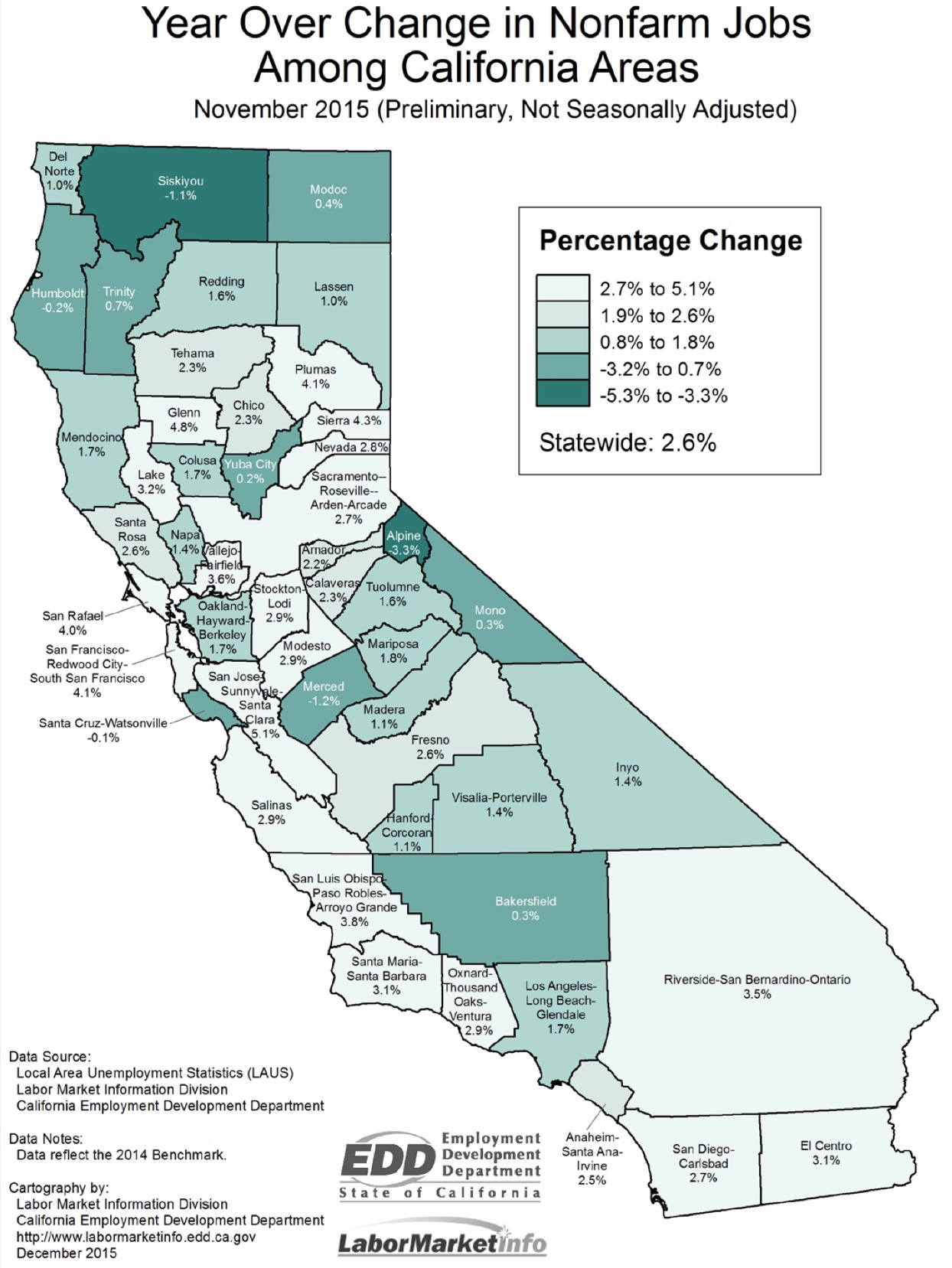