Auction Generates $8 Million In State Revenue. The Air Resources Board (ARB) released a summary of the results from the most recent quarterly cap-and-trade auction held on August 16, 2016. Based on the preliminary results, the state will likely generate about $8 million in revenue from the auction. As shown in Figure 1, this amount is similar to what the state received from the May 2016 auction ($10 million), but substantially less than the amount generated from the prior several auctions (over $500 million each). Only one percent of the available allowances that generate revenue for the state were purchased at the August auction. However, we note that 32 percent of the overall number of allowances offered for sale were purchased—including allowances owned by utilities. This is a somewhat greater percentage than the May 2016 auction (10 percent). All allowances were purchased at the minimum price established by ARB—$12.73. 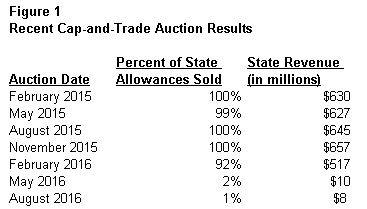 Several Factors Could Contribute to Lower Revenue. There are likely several different factors that contributed to the low demand for allowances at recent auctions. For example, the number of allowances that have been issued is likely more than the level of emissions produced by covered entities so far—thereby resulting in an oversupply of allowances which could continue for some period of time. In addition, there is an ongoing court case challenging the legality of state-auctioned allowances, and it is unclear whether ARB has legal authority to continue cap-and-trade beyond 2020. The legal and policy uncertainty could be reducing demand for allowances because the future need for those allowances is unclear.

Substantial Uncertainty About Revenue Continues. There continues to be substantial uncertainty about the amount of state auction revenue that will be raised in future auctions. Some of the major factors that could affect future demand for allowances and, thus, state revenue include: (1) overall economic conditions, (2) new legislation related to the state’s greenhouse gas goals and policies, and (3) court decisions related to the legality of state auctions. Another factor that could contribute to short-run revenue volatility is the annual increase in the minimum price—5 percent plus inflation—which will next be in effect for the February 2017 auction. It is possible that this price increase could result in somewhat higher demand for allowances at the November 2016 auction—the last one before the price increase—thereby increasing the amount of revenue generated at that auction. However, to the extent this occurs, this could be a temporary increase in demand. In which case, the demand for allowances could decrease again after the minimum price increases in early 2017.

Implications for Cap-and-Trade Expenditures. Under current law, 60 percent of auction revenue is continuously appropriated to four programs: (1) high-speed rail, (2) affordable housing and sustainable communities, (3) transit and intercity rail capital, and (4) transit operations. The most direct budgetary impact from this auction is on these programs, which will receive about $5 million from the August auction—substantially less than what they received in most earlier auctions and less than was expected prior to the May auction. Nearly $1.4 billion in unallocated funds from prior auctions are currently available for spending in 2016-17 and/or future years.

At the time of this posting, the Legislature had not yet approved a complete cap-and-trade spending plan for 2016-17. In June, we recommended the Legislature: (1) use the unallocated funds as a starting point for an expenditure plan because any additional revenue from 2016-17 is subject to considerable uncertainty; (2) ensure budget allocations go to its highest priority programs, which could include discretionary programs and continuously appropriated programs; and (3) develop a budgeting strategy for any revenue generated in 2016-17 that the Legislature would like to spend in the budget year. Based on the results from the August auction, our recommendations remain the same.