November 2020 Auction Generates $587 Million in State Revenue. The California Air Resources Board (CARB) released a summary of the results from the most recent quarterly cap-and-trade auction held on November 17, 2020. Based on the preliminary results, the state will receive an estimated $587 million in revenue from the auction. As shown in Figure 1, this amount is somewhat more than what the state received from the August 2020 auction ($474 million). The primary difference in revenue is due to changes in the number of allowances sold. All state-owned allowances offered for sale at the November auction were purchased—compared to only 83 percent purchased at the August auction. Allowances in the November auction also sold at slightly higher prices ($16.93 for 2020 vintage allowances and $17.35 for 2023 vintage allowances) than the auction floor price established by CARB ($16.68). 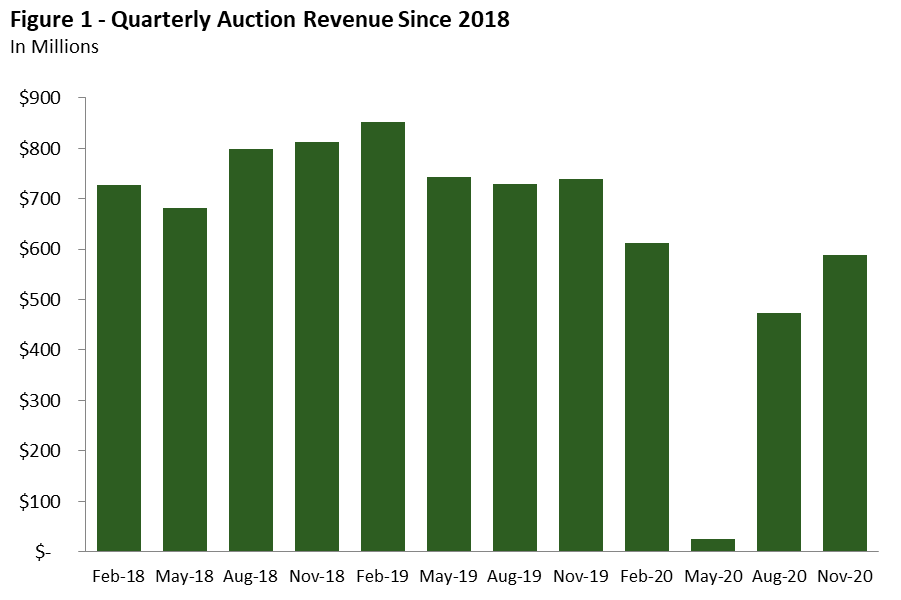 $424 Million Already Allocated to Certain Programs. Auction revenue is deposited in the Greenhouse Gas Reduction Fund. Consistent with current law, 65 percent of the November auction revenue ($382 million) will be continuously appropriated to the following programs and projects:

In addition, consistent with current law, an estimated $42 million will be transferred to the General Fund to backfill revenue losses from a 2017 expansion of a sales tax exemption for certain manufacturers.

Future Auction Revenue Continues to Be Subject to Substantial Uncertainty. Total 2020-21 revenue will depend on the outcomes of the two remaining quarterly auctions in 2020-21. Even with a rebound in revenue at the most recent two auctions, we continue to believe there is substantial uncertainty about revenue in the next few auctions. This is because auction results are subject to market demand at the time of each auction, which could change as broader economic conditions related to the pandemic change. Furthermore, increases in the auction floor price in 2021 could lower the number of allowances purchased at the next couple of auctions. As a result, in the near-term, the Legislature will want to be cautious about allocating funds based on assumptions about future auction revenue. For example, it could consider allocating only funds that have already been collected, or consider making allocations dependent on the results of future auctions.