August 2020 Auction Generates $474 Million in State Revenue. The California Air Resources Board (CARB) released a summary of the results from the most recent quarterly cap-and-trade auction held on August 18, 2020. Based on the preliminary results, the state will receive an estimated $474 million in revenue from the auction. As shown in Figure 1, this amount is substantially more than what the state received from the May 2020 auction ($25 million), but less than prior auctions—each of which generated over $600 million. The primary differences in revenue are due to changes in the number of allowances sold. Over 80 percent of the state-owned allowances offered for sale were purchased at the August auction—compared to only 4 percent purchased at the May auction. Most allowances were purchased at the minimum auction price established by the CARB ($16.68). 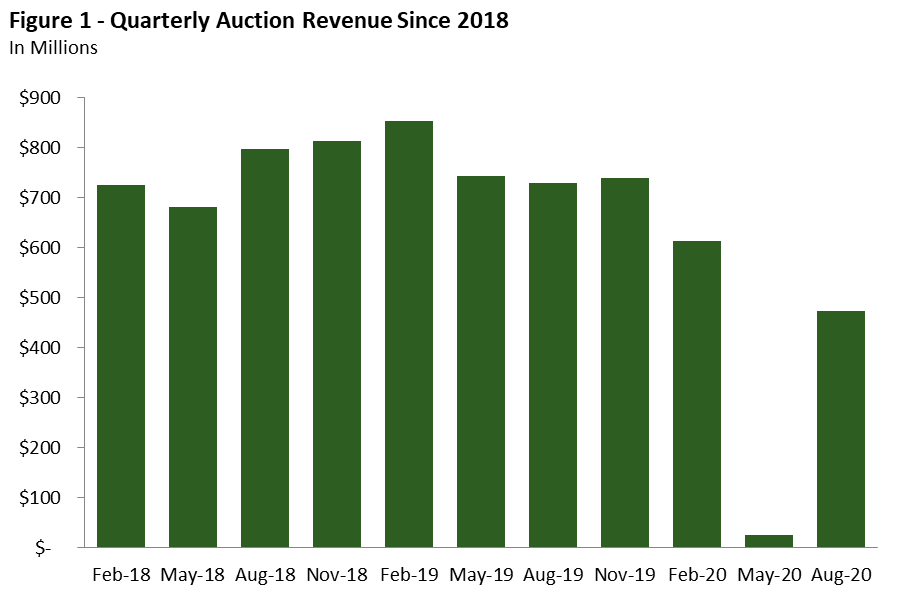 $257 Million Continuously Appropriated to Certain Programs. Auction revenue is deposited in the Greenhouse Gas Reduction Fund. Consistent with current law and the 2020-21 budget, nearly $79 million of the revenue will be taken “off-the-top” and used to pay for fire protection activities in State Responsibility Areas. Of the remaining revenue, 65 percent ($257 million) will be continuously appropriated to the following programs and projects:

The remaining auction revenues ($139 million) will be available as discretionary funding to support other state programs. While the enacted 2020-21 budget package does not include a detailed discretionary expenditure plan, it does appropriate $134 million to support state departments’ administration of programs allocated GGRF in prior years.

2020-21 Auction Revenue Subject to Substantial Uncertainty. Total 2020-21 revenue will depend on the outcomes of the remaining three quarterly auctions in 2020-21. As we mentioned in our June 2020 cap-and-trade post, there is significant uncertainty about 2020-21 auction revenue. Even with the partial rebound in revenue at the August auction, we continue to believe there is substantial uncertainty about revenue in the next few auctions.