February 2021 Auction Generates $647 Million in State Revenue. The California Air Resources Board (CARB) released a summary of the results from the most recent quarterly cap-and-trade auction held on February 17, 2021. Based on the preliminary results, the state will receive an estimated $647 million in revenue from the auction. As shown in Figure 1, this amount is somewhat more than what the state received from the November 2020 auction ($587 million). The increase in revenue is due to modest increases in both (1) the number of allowances sold and (2) prices for allowances sold. All state-owned allowances offered for sale at the February auction were purchased. Allowances sold at slightly higher prices ($17.80 for 2021 vintage allowances and $18.01 for 2024 vintage allowances) than the auction floor price established by CARB ($17.71). 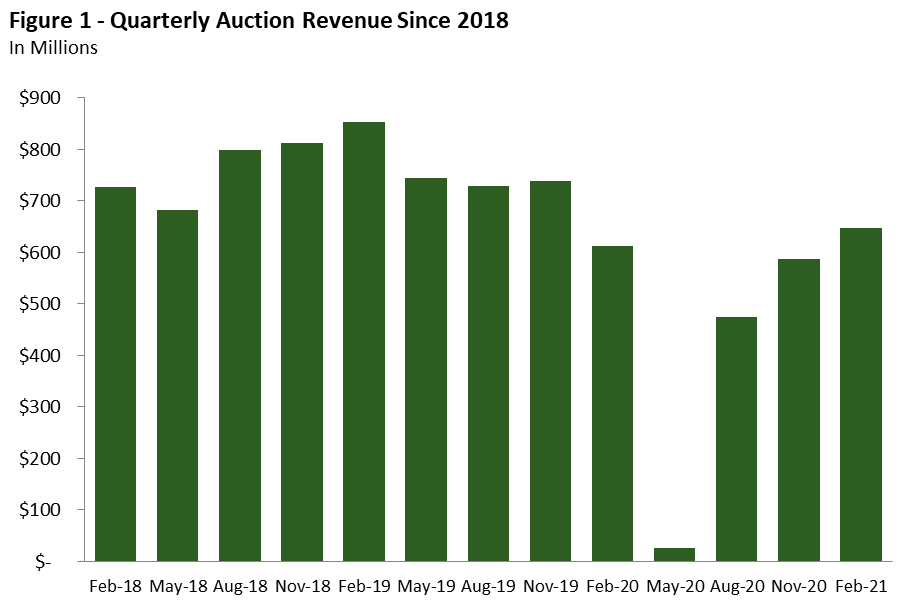 Higher Revenue Results in About $41 Million in Additional Discretionary Resources. Under current law, a total of 65 percent of auction revenue is continuously appropriated to the high-speed rail project (25 percent), Affordable Housing and Sustainable Communities Program (20 percent), Transit and Intercity Rail Capital Program (10 percent), low carbon transit operations (5 percent), and safe drinking water (5 percent). As a result, of the $117 million in additional revenue, about $76 million will be allocated to these continuously appropriated programs. The remaining $41 million in additional revenue will be available for discretionary spending—which can be allocated by the Legislature as part of this year’s budget process, or in future years.

Future Auction Revenue Continues to Be Subject to Substantial Uncertainty. As discussed in our recent budget analysis, there continues to be uncertainty about auction revenue, and the Governor’s budget would leave a relatively small fund balance (somewhat greater than $100 million). The Legislature might want to consider using some or all of the additional discretionary revenue collected from the February auction to build a larger reserve in the fund. This could help promote long-term fund solvency and greater funding stability for high priority programs.