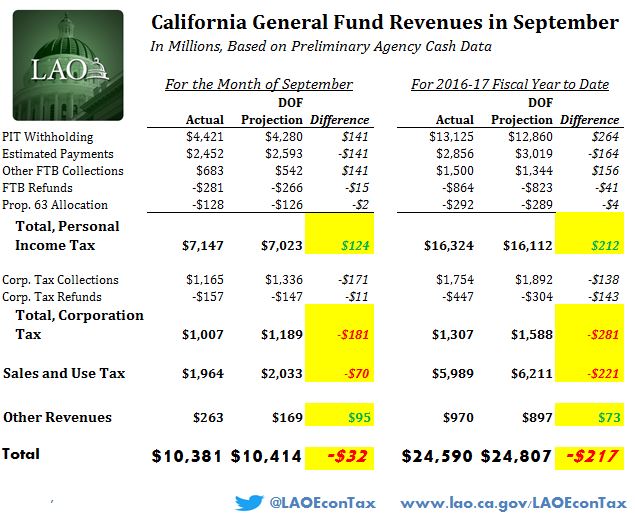 CT: No Year-Over-Year Growth in Gross Collections. September 2016 CT collections were well below the administration’s projections, but gross CT collections (before refunds) were essentially in line with last year’s levels. The lack of year-over-year growth suggests that CT revenues could be disappointing this year. State budget projections assume that gross CT collections in 2016-17 will be up 4.6% from 2015-16. December is the next important month for CT.

Next Revenue Projections. Our office will produce our next set of revenue estimates when we release our Fiscal Outlook report, expected in mid-November. The administration will release new estimates in January, in conjunction with the Governor’s initial 2017-18 state budget proposal.

This post, originally released on October 6, was updated on October 11 to include sales tax data. Data for other revenues, beyond the "Big Three" taxes, were added in an update on October 18, following posting of the monthly Department of Finance Finance Bulletin.