Auction Generates About $365 Million In State Revenue. The Air Resources Board (ARB) released a summary of the results from the most recent quarterly cap-and-trade auction held on November 15, 2016. Based on the preliminary results, the state will likely generate about $365 million in revenue from the auction. As shown below, this amount is substantially more than what the state received from the May 2016 and August 2016 auctions ($10 million and $8 million, respectively), but is still less than the amount generated from earlier auctions (over $500 million each). Over 80 percent of the total number of allowances offered for sale were purchased—including allowances owned by utilities. This is considerably more than the May 2016 and August 2016 auctions (11 percent and 32 percent, respectively). All allowances were purchased at the minimum price established by ARB—$12.73. 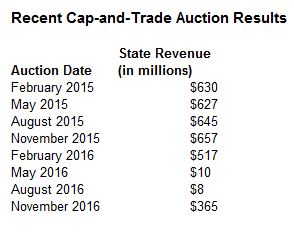 Several Factors Likely Contribute to Revenue Uncertainty and Volatility. There continues to be significant short-term and long-term uncertainty about cap-and-trade auction revenue. As we noted in our August blog post, there are likely several different factors that contributed to the low demand for allowances at the May and August auctions, including (1) an oversupply of allowances, (2) uncertainty related to an ongoing court case challenging the legality of state-auctioned allowances, and (3) uncertainty about whether ARB has legal authority to continue cap-and-trade beyond 2020. These continue to be important factors affecting overall market conditions and state revenue.

As we discussed in our August blog post, the increased bidding activity and state revenue at the November auction could be related to the annual increase in the minimum price—5 percent plus inflation—that will go into effect for the next quarterly auction in February 2017. It is important to note that, to the extent this was a major factor in the increased demand for allowances at the November auction, it could be only a temporary increase, and demand for allowances could decrease again in future auctions (assuming no other major market changes).

Implications for Cap-and-Trade Expenditures. Under current law, 60 percent of auction revenue is continuously appropriated to four programs: (1) high-speed rail, (2) affordable housing and sustainable communities, (3) transit and intercity rail capital, and (4) transit operations. The most direct budgetary impact from this auction is on these programs, which will receive a total of $219 million from the November auction—substantially more than what they received in May and August, but still less than earlier auctions. The remaining $146 million in revenue will be deposited in the Greenhouse Gas Reduction Fund and will be available for future spending. (For more information on cap-and-trade spending in the current fiscal year, see the Cap-and-Trade section of our report The 2016-17 Budget: California Spending Plan.).