Auction Generates About $500 Million in State Revenue. The Air Resources Board (ARB) released a summary of the results from the most recent quarterly cap-and-trade auction held on May 16, 2017. Based on the preliminary results, the state will generate $512 million in revenue from the auction. As shown in Figure 1, this amount is substantially more than what the state received from the last auction in February 2017 ($8 million), but similar to some earlier auctions ($517 million in February 2016, for example). All of the 2017 vintage allowances offered for sale were purchased at a price of $13.80—which is slightly more than the minimum price established by ARB ($13.57). 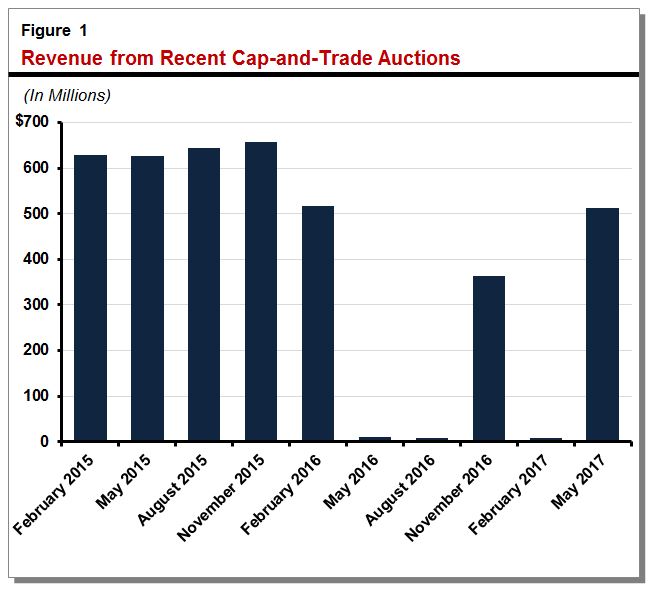 Several Factors Likely Contribute to Revenue Uncertainty and Volatility. There continues to be significant short-term and long-term uncertainty about cap-and-trade auction revenue. (It is also worth noting that, while state revenue has been volatile, allowance prices have been relatively stable.) As we noted in prior blog posts and our February budget report, there are likely several different factors that contributed to the low demand for allowances in past auctions, including (1) a likely oversupply of allowances through 2020, (2) uncertainty related to an ongoing court case challenging the legality of state-auctioned allowances, and (3) uncertainty about whether ARB has legal authority to continue cap-and-trade beyond 2020. One factor that likely contributed to the increased demand for allowances in the May auction was an April ruling by the California Third District Court of Appeal on the legality of ARB auctioning allowances. The court ruled that the ARB has authority to continue auctioning state allowances. Although the ruling is being appealed to the Supreme Court, it likely provided businesses and traders with some additional confidence about the ARB’s authority to continue the program over the next couple of years.

Implications for Cap-and-Trade Budget. The Governor’s January budget proposal assumed $1 billion in cap-and-trade revenue in 2016-17 (and $1.5 billion in 2017-18). As shown in the figure below, based on the preliminary results from the May auction, total 2016-17 revenue will be $892 million, or $108 million less the Governor’s budget assumption. As a result, programs that are continuously appropriated 60 percent of auction revenue will receive $535 million in 2016-17. Based on these revised expenditure and revenue estimates, the estimated balance of unallocated funds at the end of 2016-17 is $854 million—or $43 million less than under the Governor’s budget. (There was a substantial fund balance at the beginning of 2016-17 generated from unspent funds in prior years.) The Governor’s 2017-18 budget proposes a $2.2 billion cap-and-trade expenditure plan, $1.3 billion of which is contingent on the Legislature extending ARB’s authority to operate cap-and-trade beyond 2020 with a two-thirds vote. 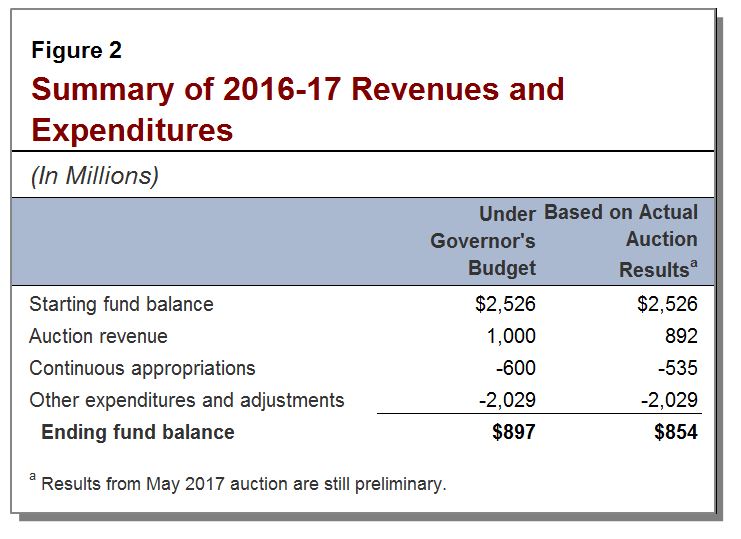 Estimates of 2017‑18 auction revenue continue to be subject to substantial uncertainty. Actions by the courts or the Legislature that provide legal clarity about the future of the program could have significant effects on future auction revenue. Perhaps the most significant factors affecting future revenue are whether or not the Legislature extends the program beyond 2020 and whether it does so with a two-thirds vote. Other factors will affect future revenues, as well. For example, if allowances auctioned in 2017-18 can be “banked” and used to comply in the post-2020 program, a statutory extension of the program would likely increase demand for allowances, allowance prices, and state revenue in 2017-18.

For more details on the Governor’s 2017-18 budget proposal and our recommendations to the Legislature, see our February report The 2017-18 Budget: Cap-and-Trade.