The Legislature recently passed SB 106 (Committee on Budget and Fiscal Review), a budget-related bill that, among other things, expands California's Earned Income Tax Credit (EITC). The Governor is expected to sign the legislation (which was discussed on pages 60-61 of the administration's recent summary of the 2017-18 budget package).

Expanded Earned Income Tax Credit. This legislation expands the state EITC to families with self-employment income and to include tax filers with incomes up to $22,300. This will increase significantly the number of filers eligible to claim the tax credit. The administration estimates the increase in EITC claims will reduce state revenues by about $140 million in 2017-18. (Note this is a forward-looking estimate and the actual amount of reduced revenue may be tens of millions of dollars lower or higher depending on the number of eligible filers who claim the credit and their incomes.)

Phases Out the Credit More Slowly. The figure below shows the amount of credit available to single filers under the prior-law EITC (dashed line) and the EITC as expanded under the new legislation.  Generally, the expanded EITC keeps the structure at the lower end of the income range, but phases out the credit more slowly for those tax filers with relatively higher incomes. 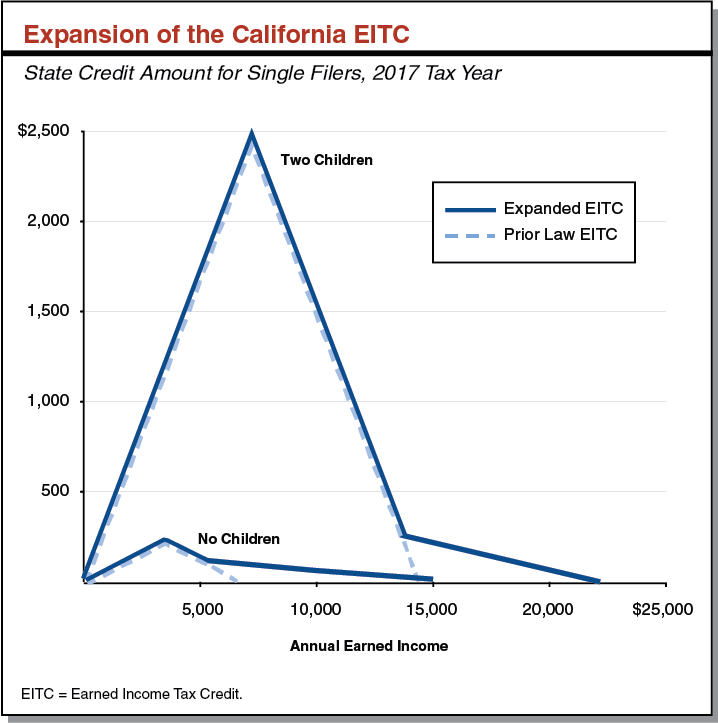 Builds on the Federal EITC. The next figure (shown below) shows the amounts of the federal EITC (dashed line) and the combined state and federal EITCs under the new legislation. The expanded EITC does not have a “plateau” similar to the federal EITC but, as discussed above, phases out more slowly for filers with income above $13,700 (and with two children). This characteristic creates the shape of the line observed in the figure below. (Under the prior-law EITC, the credit ended exactly at the maximum federal credit.) As shown in the figure, the state EITC will now phase out completely at an annual income of around $22,300 and, from that point forward, the federal EITC and combined state and federal EITC are the same amount. 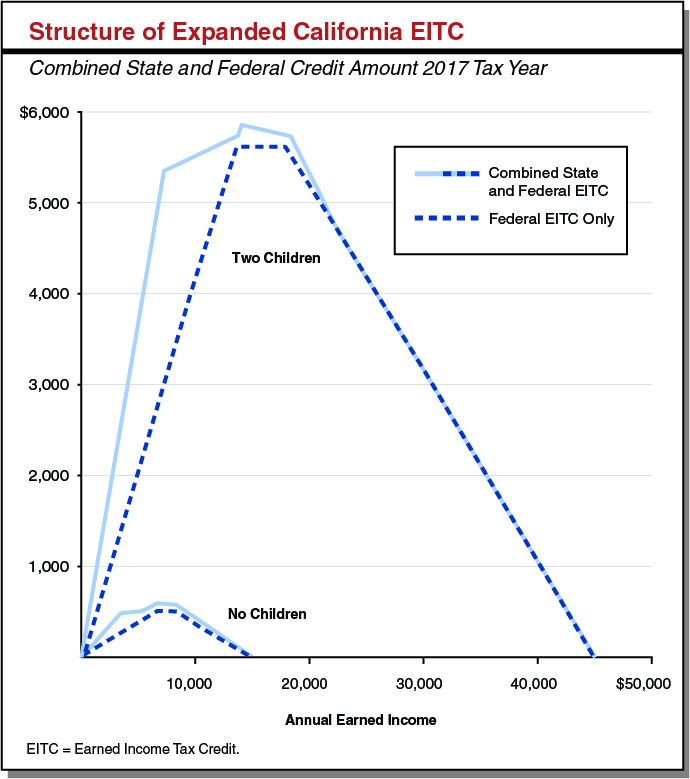 Maximum State Credit Unchanged. The final figure in this post (below) provides our estimates of the maximum state EITC amount, the annual income to receive the maximum state credit, and the annual income at which the tax filer no longer qualifies for a credit. The figure shows that the expanded credit does not increase the amount of the maximum credit nor change the income at which tax filers qualify for the maximum credit. Please note that these estimated amounts are subject to change because the Franchise Tax Board annually adjusts the maximum credit and income phase-out amounts for inflation. This is not done until later in the year, so we assumed a 2.1% inflation adjustment. The final amounts may be somewhat different.