May 2018 Auction Generates About $680 Million in Revenue. The California Air Resources Board (CARB) released a summary of the results from the most recent quarterly cap-and-trade auction held on May 15, 2018. Based on the preliminary results, the state will generate an estimated $681 million in revenue from the auction. As shown in Figure 1, this amount is slightly less than what the state received from the last auction in February 2018 ($727 million). All of the nearly 43 million CARB allowances offered for sale in the current auction (2016 and 2018 vintage) were purchased at a price of $14.65—which is slightly higher than the minimum price established by CARB ($14.53) and similar to the February auction ($14.61). Revenue is lower in May than in February for two reasons. First, over one million fewer current auction allowances were offered for sale in May. Second, about one million fewer  2021 vintage allowances were purchased (at the minimum price) at the May advance auction. 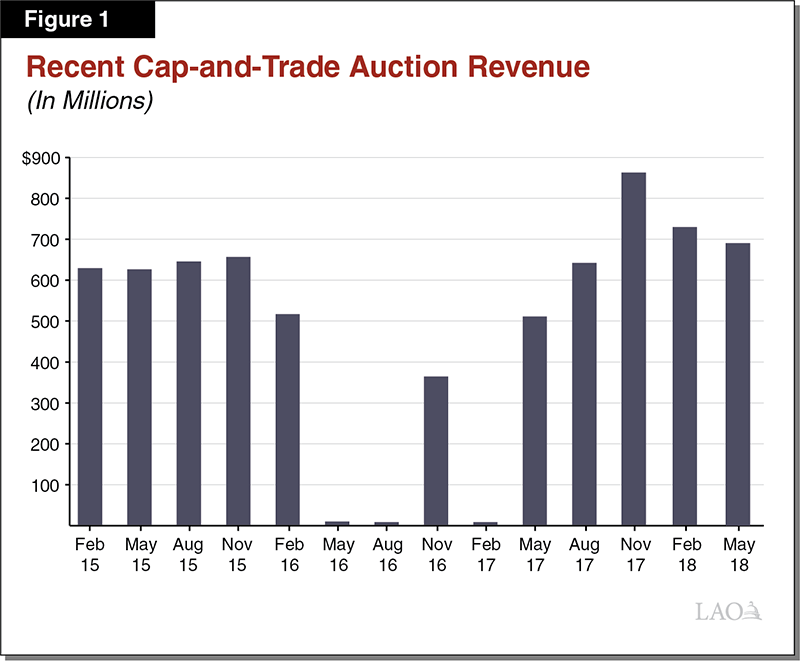 2017-18 Auction Revenue About $80 Million Higher Than Governor’s May Revision. The Governor’s May Revision assumes more than $2.8 billion in 2017‑18 revenue (and $2.4 billion in 2018‑19). Based on the May auction results, the total 2017‑18 revenue will be about $2.9 billion—or $80 million more than the May Revision assumes. Under current law, 60 percent (about $50 million) of the additional $80 million will be continuously appropriated to certain programs. This leaves about $30 million in additional revenue to allocate in the 2018-19 budget or future years. As we discussed in our February 2018 budget report, there continues to be significant uncertainty about future auction revenue. Furthermore, the Governor’s May Revision—which includes $1.3 billion in discretionary spending—would leave almost no fund balance at the end of 2018-19. Consequently, we recommend that as the Legislature develops its 2018‑19 cap-and-trade expenditure plan, it consider options to prioritize spending to ensure fund solvency in the event that future revenues are lower than current budget estimates.