Silicon Valley Economy Thriving. Yesterday, Joint Venture Silicon Valley released its 2015 Silicon Valley Index report and related materials. The report confirms that the region's economy is thriving. "Employment levels have not only reached pre-recession totals but have far exceeded them," the report finds, as incomes there rise and unemployment and poverty rates decline. As Silicon Valley "continues to innovate and cultivate new ventures," the report says, "activity in San Francisco is booming—strengthening the region's economy and providing people and companies with more options to grow and thrive in the Bay Area." The report notes that "issues of housing, transportation, and disparities in income and employment opportunities remain," including a gap between the highest- and lowest-earning racial and ethnic groups that is larger than in California or the U.S. as a whole. The report also finds that men in Silicon Valley earn up to 61% more than their female peers, a gender income gap that "is more pronounced in Silicon Valley than in San Francisco, California or the United States, and is getting larger over time."

San Mateo, Santa Clara, San Francisco, & Marin: Four Key Counties for State Revenue. California's personal income tax is state government's dominant revenue source, making up about two-thirds of revenues in the General Fund (the main state account that funds schools, universities, health and social services programs, and prisons). California's income tax has a highly progressive rate structure, meaning that it imposes much higher rates on higher-income people. As of 2012, this led to the top 1 percent of all income tax filers statewide paying just over 50 percent of the state's personal income taxes, despite making only 25 percent of the adjusted gross income (AGI) reported on all Californians' returns.

The four counties that rank #1, #2, #3, and #4 for median AGI reported on all California returns are Marin, San Mateo, Santa Clara, and San Francisco, respectively. (The median 2012 AGI on joint tax returns, for example, was $109,827 in San Mateo County and $109,309 in Santa Clara County, compared to $70,938 for all joint returns in the state.) With such high incomes, this means that the Silicon Valley, San Francisco, and Marin collectively pay a significant share of California's state personal income taxes. As shown below, with under 10% of the state's population, San Mateo, Santa Clara, San Francisco, and Marin tax filers paid about 26% of the state's personal income taxes in 2012. As such, the economic improvement in Silicon Valley and nearby parts of the Bay Area have been key to the improvement of the state's fiscal condition in recent years. 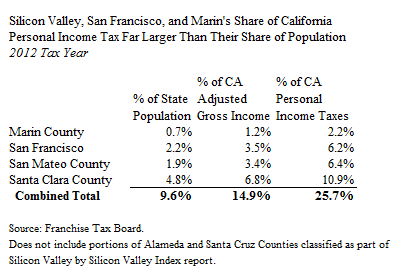 2012 Not a Typical Year. 2012 was not a typical tax year, and various factors increased the share of PIT paid by these four counties then. First, 2012 was the first year of Proposition 30's increased PIT rates. Second, changes in federal tax laws at the end of 2012 (related to the "fiscal cliff") resulted in significant shifts of income from 2013 to 2012 to avoid higher tax rates, especially by higher-income individuals. Third, a large portion of the taxable income related to the May 2012 initial public offering (IPO) of Facebook, Inc. was claimed on returns in that year, and a very large portion of Facebook executives and employees live in the Bay Area. Nevertheless, even in 2011 (before Proposition 30, the Facebook IPO, and the fiscal cliff), FTB data show that these four counties paid 23.4% of all California personal income taxes.