Bottom Line. Revenue collections through January have been well ahead of projections in the recently released 2021-22 Governor’s Budget. After accounting for changes in constitutionally-required spending, we estimate that these higher-than-expected collections represent a roughly $4 billion increase in discretionary state funding relative to the Governor’s Budget. We caution that the much of the recent surge in tax collections is attributable to highly volatile revenue streams—taxes on investment income. While collections have been trending in a positive direction, a reversal later in the fiscal year remains possible.

Overall, January collections from the state’s three largest taxes—the personal income tax, corporation tax, and sales tax—were $7.5 billion (42%) ahead of budget projections. Across December and January, collections were $10.5 billion ahead of budget projections. The majority of these higher-than-expected collections come from personal income tax estimated payments. Estimated payments largely reflect taxpayers’ expectations of how much tax they will owe on their business and investment income for 2020. The continued rise of asset prices—especially for stocks and real estate—in recent months likely is a key driver of strong estimated payments. The stock market currently sits 16 percent above its pre-pandemic high in February 2020. 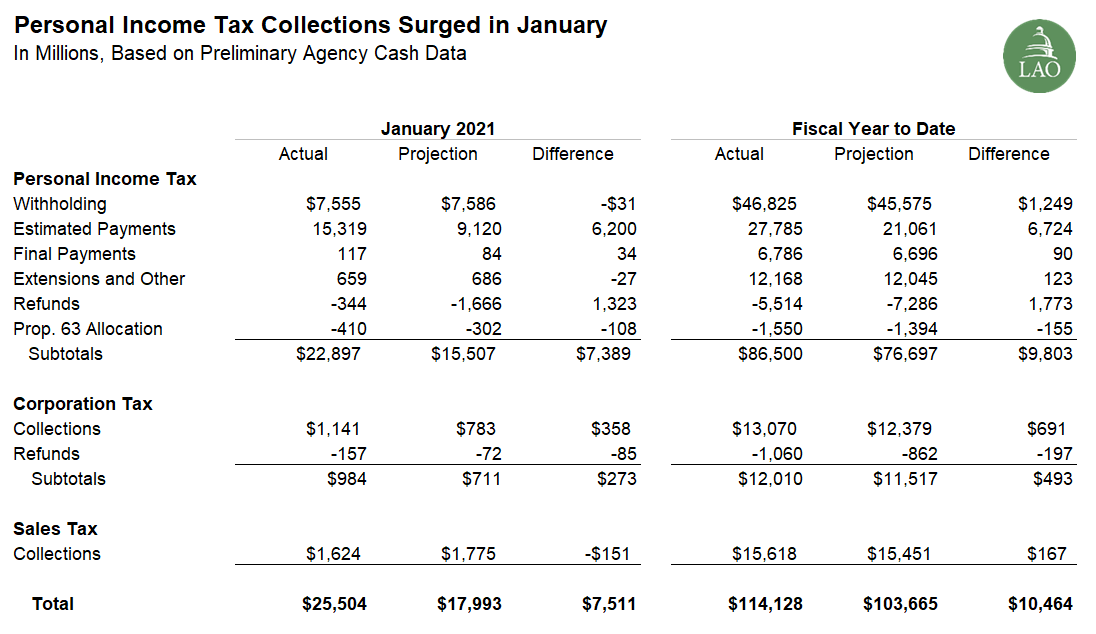 In our Overview of the Governor’s Budget, we discussed how the Governor allocated a significant one-time windfall (discretionary budget resources). Assuming no other changes in revenues or expenditures, the recent tax surge discussed in this post will increase this windfall at the time of the May Revision. The increase in the windfall, however, likely will be considerably less than $10.5 billion for several reasons: 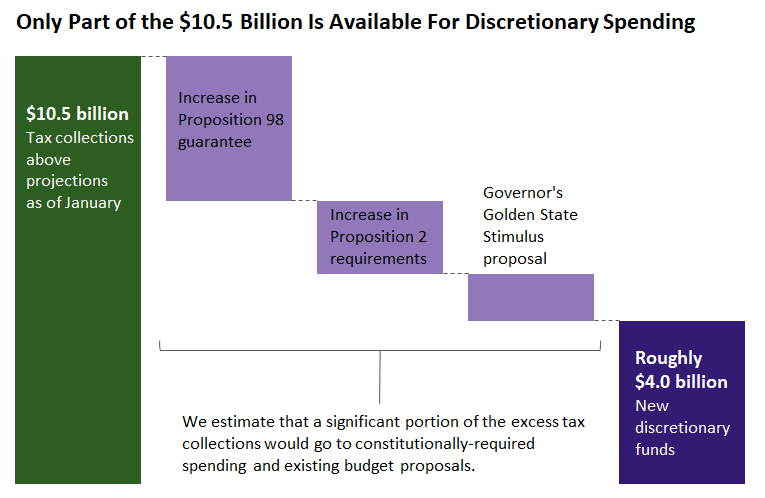 After accounting for the above factors, we estimate that the recent revenue surge likely increases the windfall by $4 billion. However, many other budget estimates will change between now and May. For example, federal reimbursements on state emergency spending are likely to be somewhat higher, given recent guidance released by the federal administration. Other changes—such as higher or lower spending on COVID-19, higher or lower spending on caseload-driven programs, and higher or lower federal funding to the state—also are likely. We also caution that much of the recent surge in tax collections is attributable to taxes on highly volatile investment income. Given these and other factors, the windfall could change by billions of dollars between now and May Revision.