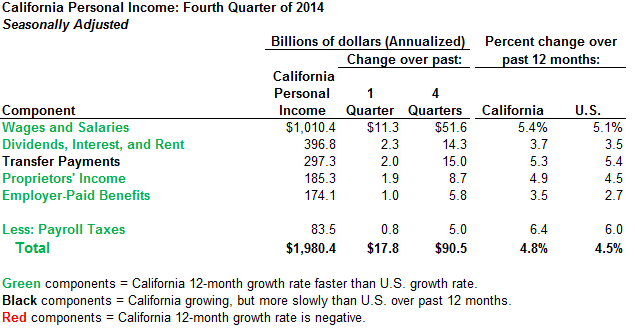 Wages and Salaries Growing Faster in California Than U.S. Over Past Year. As the table above shows, wages and salaries account for just more than half of the state’s personal income. Over the past 12 months, wages and salaries grew somewhat faster than the other components of personal income. They also grew slightly faster in California than in the rest of the nation. Income growth in the fourth quarter of 2014 also appears to have been somewhat slower than it was in the first three quarters. (More information on the various components of personal income is available here.)

2014 Annual Growth Rate Good, But Below Late 1990s Levels. The figure below shows annual growth rates of California personal income since 1991, using the average level of personal income in the four quarters of each year. In 2014, according to the new BEA data, California "annual personal income" grew by 4.7% according to this measure, compared to 3.9% for the nation as a whole. The solid blue line in the figure below shows raw dollar amounts, and the dotted line shows inflation-adjusted amounts. The inflation-adjusted growth rate in 2014 was better than average although still well below the levels of the late 1990s technology boom. 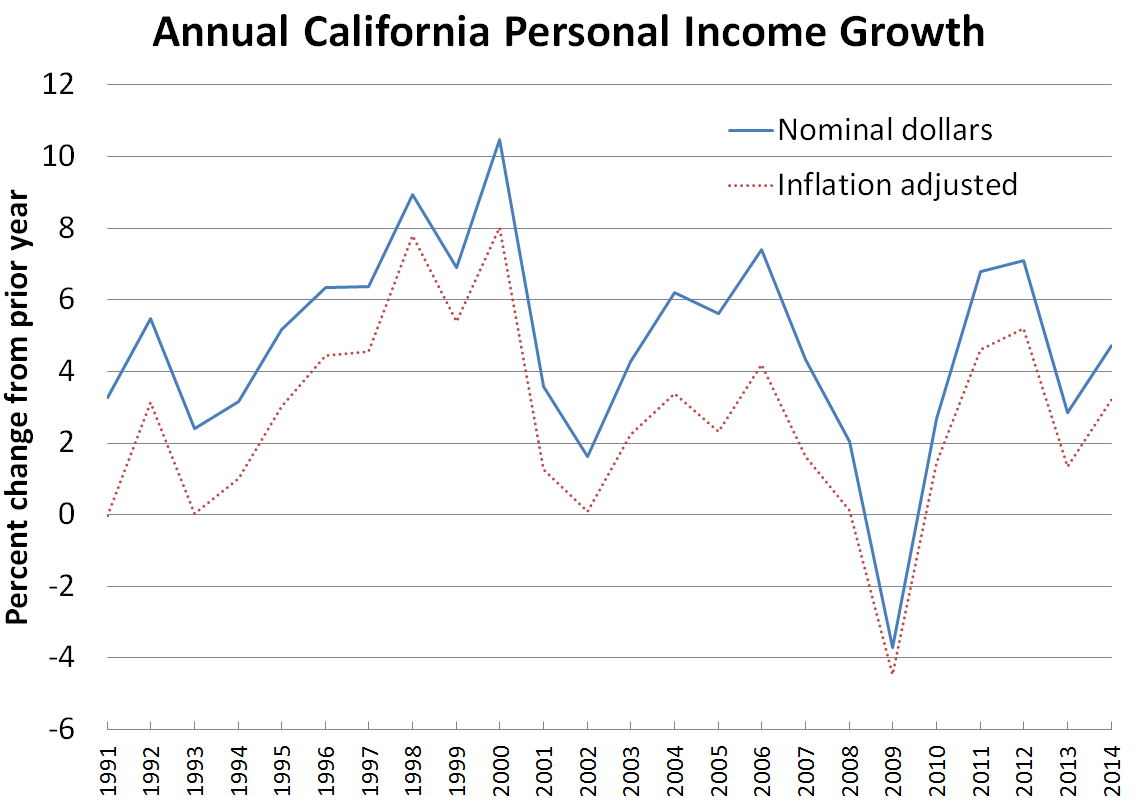 The figure above suggests that the state’s economy grew strongly in 2012 but suffered a sharp dropoff in 2013. This could be misleading unless viewed in context: the decline in personal income growth stemmed in part from affluent taxpayers "booking" income in 2012 that they normally would have booked in 2013 in order to avoid the federal tax increase that took effect at the start of 2013. This boosted incomes booked in late 2012, for example, by reducing income that otherwise would have been booked in early 2013. In addition, the one-time surge of income resulting from the initial public offering of Facebook, a Bay Area technology company, may have boosted the 2012 personal income totals to some extent.

BEA State-by-State Comparison for 2014 Annual Personal Income Growth. Below is a BEA graphic comparing states in terms of annual personal income growth from 2013 to 2014. California ranked 8th highest among the 50 states by this measure in 2014, BEA said. 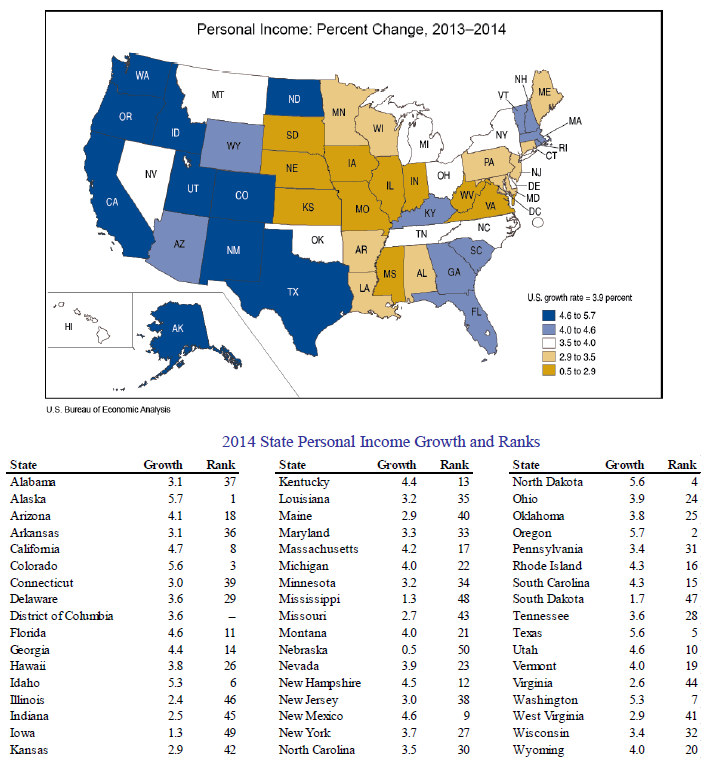 Quarterly Growth Figure Slightly Slower Than U.S. On a seasonally-adjusted basis, as indicated in the first figure in this post, California personal income grew by $17.8 billion (annualized) from the third to fourth quarters of 2014. This quarterly growth amounted to 0.9% for California, slightly slower than the 1.0% growth figure for the U.S. that BEA reported. From the third quarter to the fourth quarter, the rate of California personal income growth ranked 33rd highest among the 50 states, BEA said. Texas personal income growth (1.5%) ranked first among the states in that quarter.

Personal Income Statistics Key to California's Budget. Personal income statistics for the fourth quarter are key variables in several state budget formulas, including those related to the constitutional state appropriation limit (SAL, or the "Gann limit"), as well as budget calculations related to school funding and Proposition 2 of 2014 (related to budget reserves and debt payments).