On June 10, the U.S. Bureau of Economic Analysis released its preliminary estimates of state gross domestic product (GDP) for 2014, as we described in a blog post last week. California's 2014 GDP—the value of all goods and services produced here—was estimated at $2.31 trillion. In this blog post, we discuss one of the most common questions we are asked—how California's economy compares with that of major countries around the world—based on the preliminary 2014 GDP data.

California Was the 7th or 8th Largest Economy in World in 2014, Based on Traditional Measure. There are different estimates of countries' GDP. Based on three estimates now available, the 2014 GDP of California ranked either as the 7th or 8th largest—based on international GDP estimates converted to U.S. dollars. The figure below shows how California ranks based on estimates from the International Monetary Fund (IMF), the World Bank, and the U.S. Central Intelligence Agency (CIA) World Factbook publication. This exercise essentially treats California as if it were a separate nation-state. Because the difference between California and Brazil is very small in the IMF and World Bank data, it is possible that later revisions could result in California rising to #7 on these lists as well. (The state Department of Finance [DOF] shows the GDP comparison on its website using IMF data.) 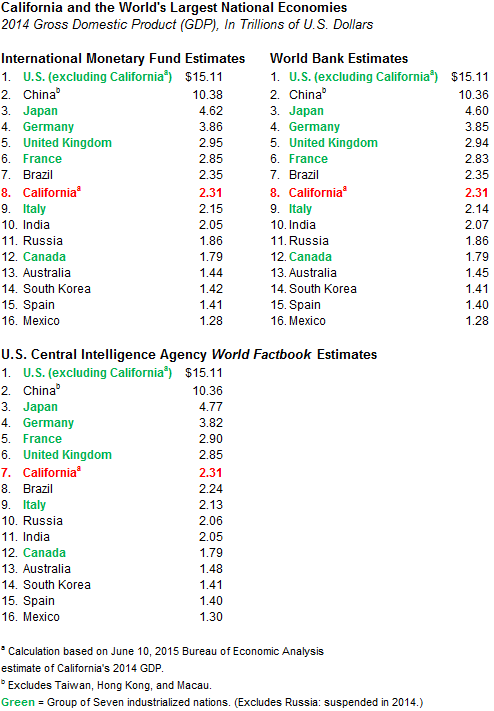 As shown above, California's economy is of a size that would justify its inclusion in the Group of Seven (or Eight) industrialized nations, were it independent. This is because California's economy is larger than that of two "G7" members: Italy and Canada. The international estimates above convert GDP in countries’ home currencies to dollars based on exchange rates that prevailed in 2014. As such, changes in currency exchange rates can affect these rankings noticeably from year to year.

Changes Since 2013. There has been little change in California's GDP ranking in 2014, based on the estimates available to date. In our blog post on GDP rankings late last year, we highlighted the World Bank's GDP data, which would have ranked California 8th at the time. We also noted that, using CIA or IMF data, California would have ranked 7th or 8th, respectively, for 2013.

Adjusted for Cost of Living, California's Economy Could Be Viewed as Ranking #11. An alternative international GDP comparison uses purchasing power parity (PPP) instead of exchange rates to attempt to adjust for differences in living costs across countries. Using PPP, California’s economy—adjusted for cost of living—can be viewed as ranking eleventh in the world, as shown below. 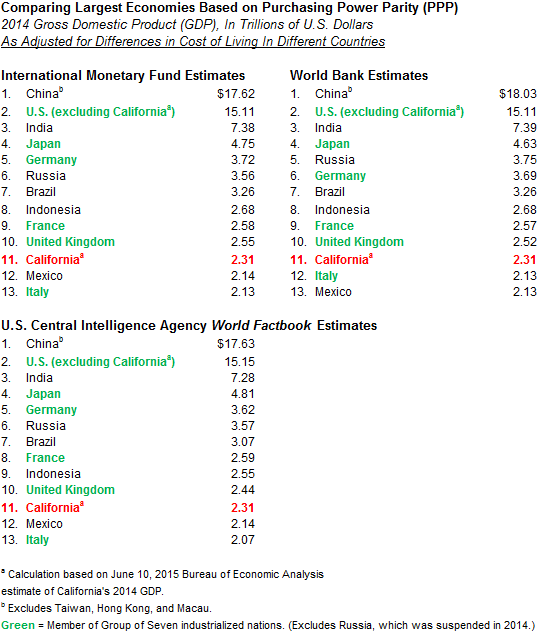 This dataset essentially assumes that the cost of living is uniform across the entire U.S. California's cost of living is higher than the U.S. in several key categories, such that a more refined PPP estimate, if it were available, might adjust California's GDP down somewhat, compared to the data in the table above.

Using the PPP measure, China’s economy is now larger than that of the entire U.S. As the CIA World Factbook explains, "because China's exchange rate is determine[d] by fiat, rather than by market forces, the official exchange rate measure of GDP [that is, the traditional measure described earlier in this post] is not an accurate measure of China's input," as it "substantially understate's the actual level of China's output vis-a-vis the rest of the world." The World Factbook opines that the GDP measurement under the PPP method "provides the best measure for comparing output across countries," including China. Both India and Indonesia’s economies also are larger than California’s by this measure due to their lower costs of living. (Wikipedia has useful entries that list various international GDP rankings, including PPP rankings.)

Per Capita GDP: California Ranks Very Highly Internationally. As shown below, California, if it were a separate country from the rest of the U.S., could be viewed as ranking #7 in GDP per capita (per person), according to IMF data. (Several other U.S. states with higher GDP per capita, including some with substantial oil and gas production, are not shown in this ranking list but are mentioned in its footnotes.) 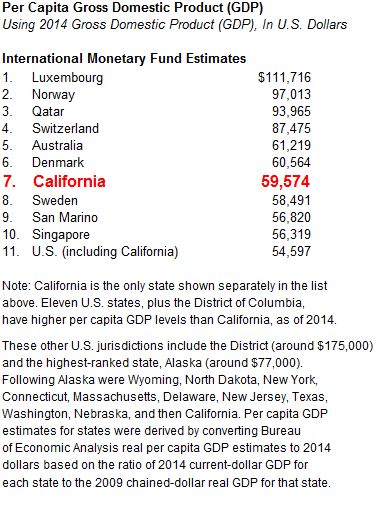 GDP per capita rankings can vary based on which countries are included. For example, the IMF data above excludes some small territories (Monaco, Liechtenstein, Macau, and Bermuda) that likely would outrank California. If included, Jersey, the Falkland Islands, and the Cayman Islands could rank lower than California, but above the U.S. as a whole.

Comparisons to Other U.S. States

#1 California GDP 40% Bigger Than #2 Texas. With an estimated $2.31 trillion of GDP in 2014, California has the largest state-level economy in the U.S. due largely to its population, which ranks 1st among U.S. states. Texas ranks 2nd at $1.65 trillion. This means that California's 2014 GDP was 40% bigger than that of Texas. In 2014, Texas GDP grew at 5.2% (2nd highest growth rate among states), versus California's 2.8% growth rate (9th highest growth rate). Texas was one of the oil and gas states that had significant GDP growth in 2014. Because the price of oil and its production have declined, GDP growth in Texas and some other states may be significantly less in 2015.