How Much Money Does the Federal Government Spend in California?

In this post, we estimate total federal expenditures in California by major program. 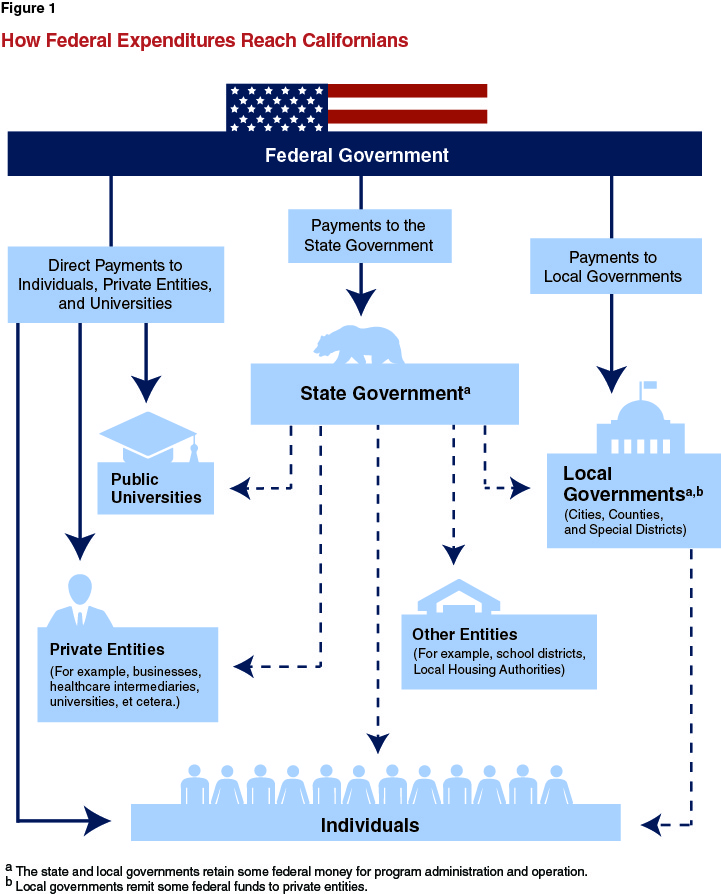 Intermediate Payments Attributed to Their First Recipient. As displayed in the figure, we categorize federal payments by their first recipient, not their ultimate beneficiary. This method is consistent throughout the blog series except in Post 5, where we discuss all federal expenditures received by counties. Federal Medicaid funding for child welfare services, for example, is distributed from the federal government, to the state, and then to counties for the provision of services. Similarly, most federal funding for the Supplemental Nutrition Assistance Program (SNAP) flows from the state to grocers (which we define as private entities). The state also distributes most federal funds for education to school districts and local education agencies. However, despite these ultimate beneficiaries, we categorize all federal payments that are first distributed to the state as “payments to the state government.” We take a similar approach for payments to local governments.

Federal Spending in California. Figure 2 shows federal spending in California by recipient, and then by program. (This list excludes some small programs. Please see the methodology post for more information). In general, the figure displays funding amounts paid during or around state fiscal year 2014-15 (in some cases the most recent data available are from an earlier time period). Some amounts are published on different bases that do not align with the state fiscal year (July 1st to June 30th). For example, the refundable portion of the EITC is estimated on a tax year basis (which runs from January 1st to December 31st) and defense contracts on a federal fiscal year basis (October 1st to September 30th) .

The figure shows total annual federal expenditures in California are around $376 billion. (As we note in the methodology post, the estimates in this figure are subject to some uncertainty and exclude some small federal spending amounts.) With an estimated population of 38.9 million in early 2015, this corresponds to federal payments of about $9,700 per person in the state of California.