Compared to Other States, California Receives a Smaller Amount of Federal Money Per Person. The Pew Charitable Trusts publishes an annual report on Federal Spending in the States where it estimates that California received $9,172 in federal expenditures per person in FFY 2013-14. (Our estimate of this figure is somewhat higher.) Pew’s estimate of per person expenditures in California is below the national average of $10,200. Figure 1 displays federal spending per person by state in FFY 2013-14, as estimated by Pew. Based on this measure, California ranked 41st (out of fifty states and the District of Columbia). In a blog post published in 2015, we noted this ranking is mostly because California, with a younger population, receives significantly less in federal retirement benefits, such as Social Security. In FFY 2013-14 California received $2,740 per person in retirement benefits, compared to the national average of $3,474. California also receives somewhat less per capita in federal salaries and wages, $752 compared to a national average of $957. 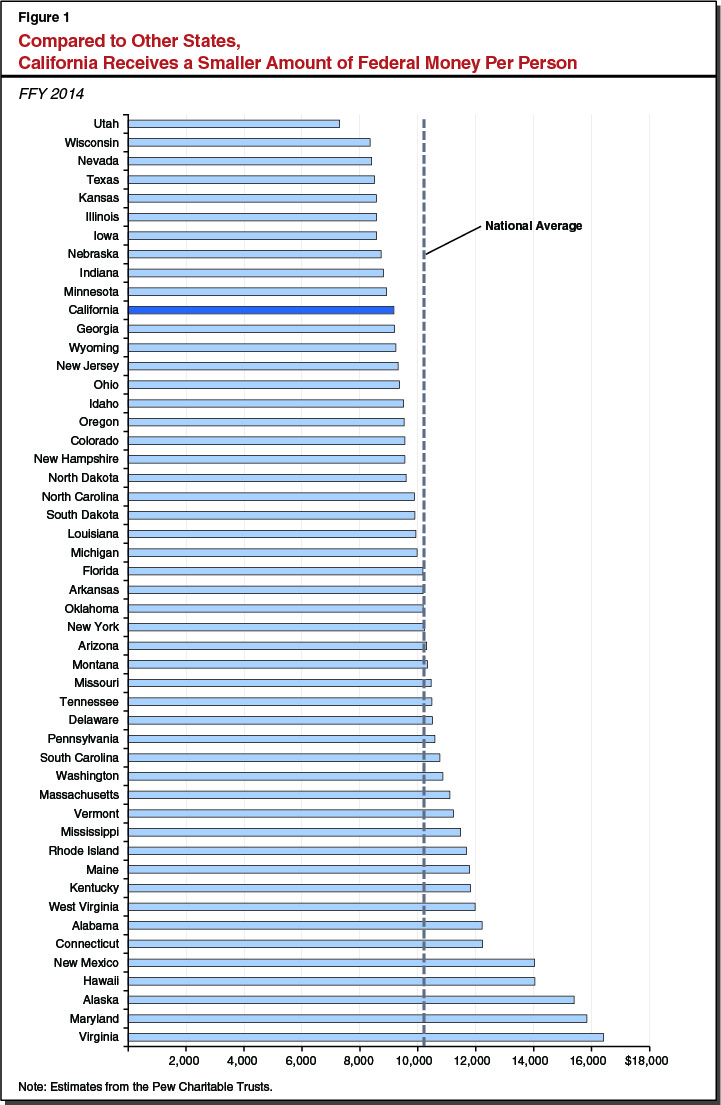 Compared to Other States, Federal Spending Accounts for a Smaller Share of California’s Economy. Pew’s report also compares federal expenditures in each state to the size of its economy. According to the Pew estimates, in FFY 2013-14, federal expenditures made up about 16 percent of California’s economy—less than the national average of 19 percent. On this measure California ranked 42nd among fifty states and the District of Columbia.

Comparing Federal Expenditures Received to Federal Taxes Paid. Another way of comparing federal expenditures among states is by comparing them to the amount of taxes paid by that state. In 2015, the New York Comptroller published a study that estimates these amounts for all fifty states and the District of Columbia. The study notes that, in FFY 2012-13, the federal government spent nearly $3.5 trillion and brought in about $2.8 trillion in revenue. (The report’s allocated figures exclude some revenues, like customs duties, and expenditures, like net interest on the federal debt, that are not relevant or practical to allocate to the states.) As such, nationally, the federal government spent $1.22 per dollar in taxes received. (If the federal government did not spend more than it received in taxes, this ratio would be closer to $1.00.) 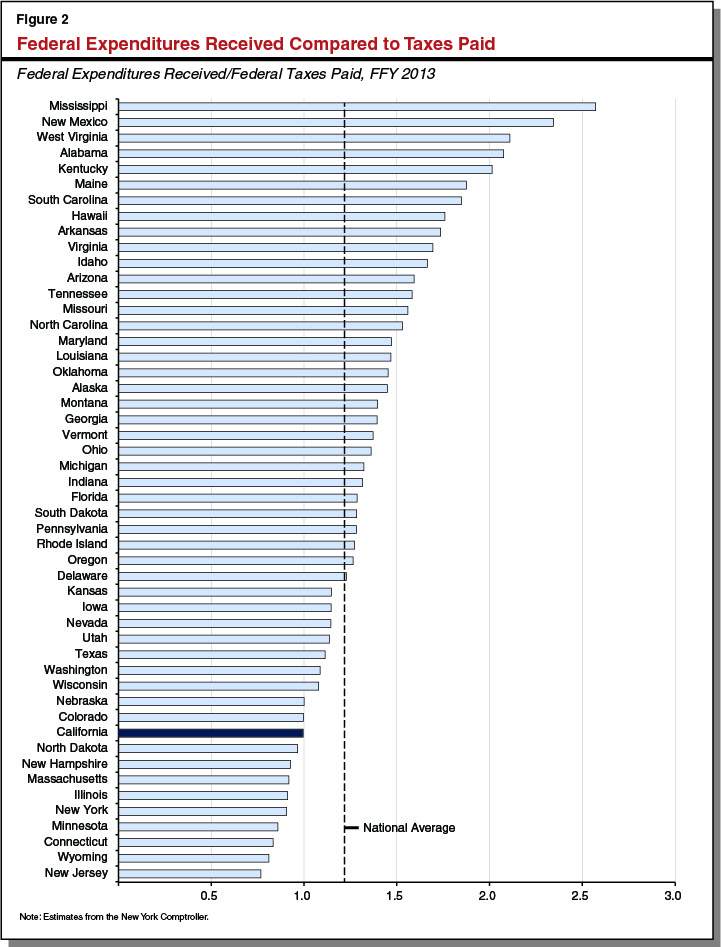 Is California a “Donor State”? In 2007, the Tax Foundation published estimates, using FFY 1981-2005 data, that showed California received $0.78 in federal spending for every dollar paid in federal taxes (in the most recent year). Some have used this finding to suggest that California pays much more in taxes than it receives in expenditures (and, for that reason, has been dubbed a “donor state”). It is important to note that the Tax Foundation figure is adjusted to be deficit neutral so that the federal government receives $1 in taxes for each $1 it spends. To do this, the Tax Foundation increases its estimate of tax revenues from each state in proportion to the total federal deficit. In effect, this inflates the estimated amount Californians “pay” in taxes.