Federal Expenditures to the State Government

In this post, we present more details on federal funding amounts that are paid directly to the state government. Together, these payments represent about 21 percent of the total $376 billion annual federal expenditures in California. As in Post 1, we categorize payments according to the first recipient, not the ultimate beneficiary. For example, payments to state government that are then distributed to local governments are considered federal expenditures to the state in this post.

Most Federal Expenditures to California Supports Medi-Cal, State’s Medicaid Program. Medi-Cal—the name of the state’s Medicaid program—provides health insurance to low-income Californians and covers roughly one-third of the state’s population. Figure 1 shows the distribution of total federal expenditures to the state government. The federal government provided $55 billion in funding for Medi-Cal in fiscal year 2014-15, which makes it the largest source of federal funds to the state government. This total includes roughly $3 billion in funds for the Children’s Health Insurance Program (CHIP), which provides healthcare coverage to children in families who earn too much money to qualify for Medi-Cal. 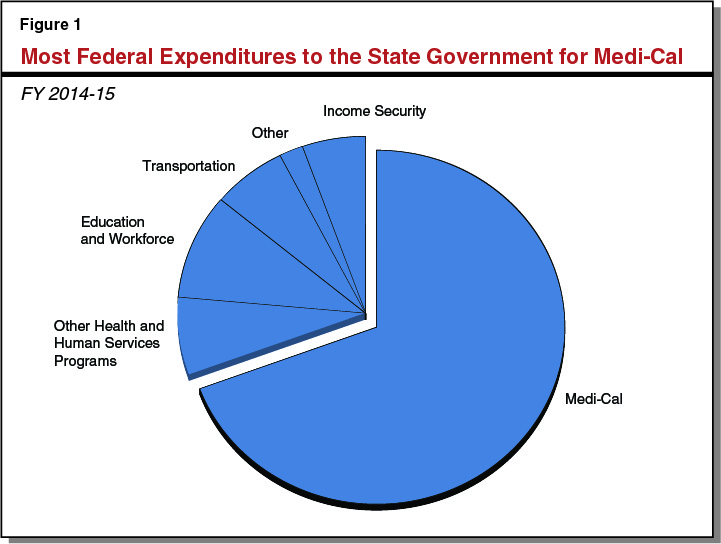 Comparing Federal, State, and Local Funding in Medi-Cal, Education, and Transportation. Figure 1 compares federal, state, and local funding in Medi-Cal, K-12 education, and transportation. In Medi-Cal, the federal government represented over two-thirds of the program’s total $83 billion in expenditures in FY 2014-15. (In 2015, the federal government also spent an additional $69 billion on healthcare coverage through Medicare for over 5.5 million Californians. Medicare does not receive any additional state or local funding.) By contrast, federal funding makes up only 9 percent of total spending on K-12 education in California, while the state represents 62 percent. Finally, local governments provide the majority of funding for transportation services, including roads, highways, and safety. In this area, federal funding makes up 22 percent of total funds, while local governments represent 54 percent of total spending on transportation. 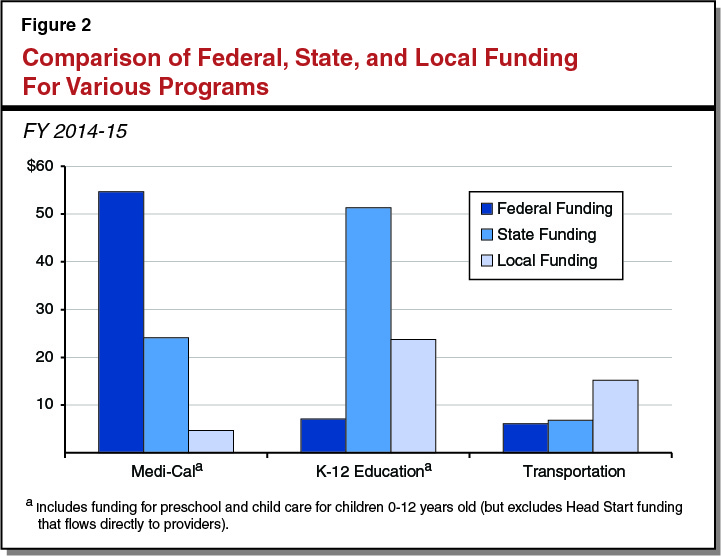