Geographic Distribution of Federal Expenditures For Most Major Programs

In this post we present total and per capita federal expenditures by county for most major programs.

Per Capita Federal Expenditures by County. Figure 1 displays per-capita federal expenditures, by county, for major expenditures. The statewide average for this measure is around $8,700. (This per capita statewide average is lower than the one presented in Post 1 because it excludes programs for which we could not obtain county-level data.) In the figure, the two darker colors indicate counties with above-average per-capita federal expenditures and the lighter colors indicate counties with below-average amounts. 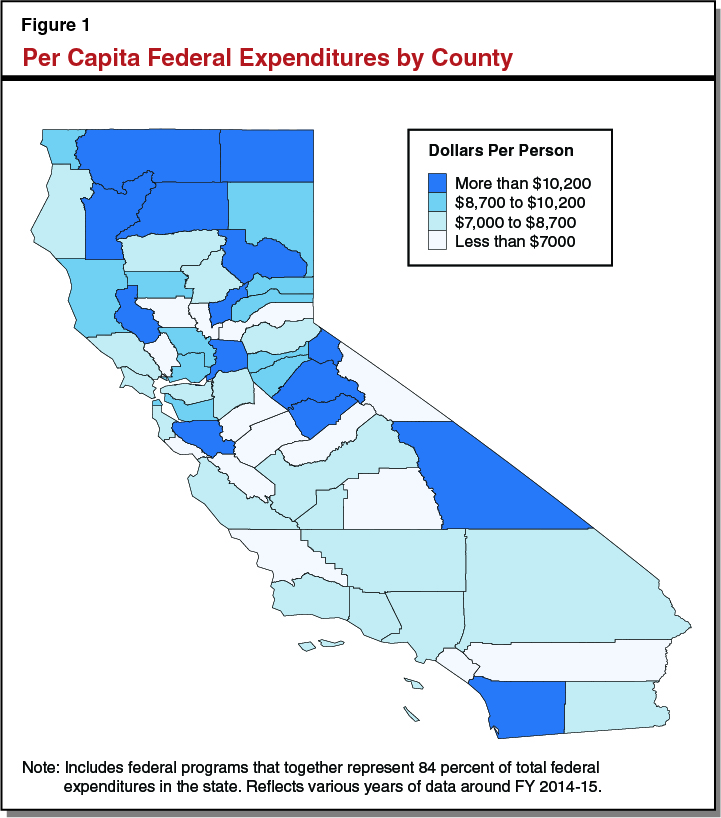 Many Counties With High Per Person Federal Expenditures Tend to Have Older Populations. Counties with the highest per-capita federal expenditures (in the figure, those with more than $10,200 per person in federal expenditures) are largely those with high proportions of seniors. As a result, these counties receive more Social Security and Medicare benefits. They include: Inyo, Tuolumne, Lake, Shasta, Plumas, Modoc, Siskiyou, Mariposa, and Trinity. Individuals aged 65 and above represent an average of 22 percent of the total population of each of these counties — compared to a statewide average of roughly 15 percent.

Other Counties With High Per-Person Federal Expenditures. Other counties with per-person expenditures above $10,200 have other significant drivers. Sacramento and Santa Clara both have high proportions of federal contracts per capita, particularly for procurements for the Department of Defense and Department of Veterans Affairs. Lassen has significantly more federal civilian wages per capita than average. Yuba, which has an Air Force base, and San Diego, which is home to multiple Naval bases, both have high military wages per capita. Finally, Alpine county receives high Medi-Cal expenditures per capita.

Counties with Low Per Person Federal Expenditures. Counties with the lowest per person federal spending, below $7,000 per person, include: Madera, Merced, Mono, Napa, Orange, Placer, Riverside, San Benito, San Luis Obispo, Santa Cruz, Stanislaus, Sutter, Tulare, and Yolo. These counties also generally have low per person expenditures in all, or nearly all, identified categories of spending. With no significant military presence, they mostly have low military wages per capita and fewer government contracts. These counties tend to have below average proportions of individuals aged 65 and older, with an average of 13 percent compared to the statewide average of roughly 15 percent. As a result, they also have lower per person spending in Medicare and Social Security.