In this post we provide more details on those federal payments that are made directly to individuals, private entities (including businesses, healthcare intermediaries, non-profit organizations), and universities (including private universities, the University of California, and California State University). Together, these payments represent about 77 percent of the total $376 billion annual federal expenditures in California. Figure 1 shows the federal payments by program in four categories: 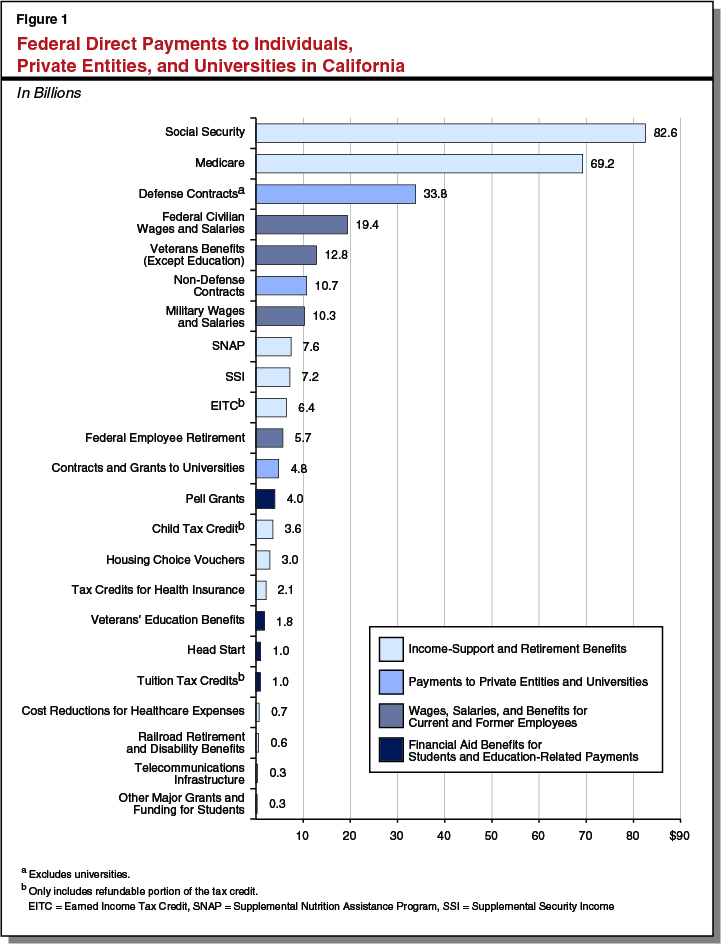 Other Income-Support Benefits for In-Kind Assistance and Tax Credits. Our category of Income-Support and Retirement Benefits also includes federal in-kind assistance, which are benefits that pay for goods and services instead of cash payments. In addition to Medicare, these in-kind programs include: (1) the Supplemental Nutrition Assistance Program (SNAP), which provides food assistance to low-income individuals and (2) Housing Choice Vouchers, which provide assistance to very low-income families for housing. Counties administer SNAP, but the federal government paid the $7.6 billion in SNAP benefits directly to California grocers (we include costs to administer the SNAP program in payments to the state government, which are ultimately allocated to counties). In FFY 2014-15, the federal government also allocated $3 billion in Housing Choice Vouchers to local housing authorities, which then distribute them to individuals.

Finally, this category includes the refundable portion of two major tax credits: the Earned Income Tax Credit (EITC), which provides a refundable tax credit to low- to moderate-income working individuals and couples; and the Child Tax Credit, which provides refundable tax credits to eligible low-income families with children. This category also includes the entire amount of insurance premium subsidies provided to low income Californians to purchase health insurance coverage. All together, these credits provide about $12 billion in benefits to Californians.

Financial Aid to Students in California. In FFY 2014-15, the federal government provided $4 billion in Pell Grants to recipients attending all private and public higher education institutions in California. Pell Grants provide assistance to low-income undergraduate and certain postbaccalaureate students for tuition and other expenses. In that year, the federal government also provided $1.8 billion in funding for education and vocational training for veterans and, in 2014, $1 billion in the refundable portion of federal education tax credits.

Education-Related Payments. The federal government also provides some payments that support education in the state, but are paid directly to private entities, rather than the state government or individuals. In FFY 2014-15, this federal funding included nearly $1 billion in grants to providers for early childhood education and other parental services through the Head Start program. These funds also included about $300 million in payments to telecommunications companies to provide discounts to schools and libraries for internet access and other telecommunication services.