We discussed August 2015 state jobs data in a recent post, including some discussion of local job growth and unemployment. On September 30, the U.S. Bureau of Labor Statistics (BLS) released data on August 2015 employment in the nation's 387 metropolitan statistical areas (MSAs) and other metropolitan regions.

The San Jose MSA (Santa Clara and San Benito Counties) saw its number of payroll nonfarm jobs grow by 5.5% from August 2014 to August 2015. As shown in the table below, the San Jose MSA had the second-highest job growth rate over the past 12 months among the 387 MSAs. San Jose was surpassed only by Provo, Utah's MSA with its 6.2% job growth. (Among the MSAs with a population of 1 million or more, the San Jose MSA has the highest job growth rate over the past 12 months, surpassing the next-highest large MSA by this measure: Charlotte, NC, which recorded a 4.0% growth rate.) At the same time, of the 20 MSAs with the highest unemployment rates, half were in California, as indicated in yellow in the table below.

Note that the table below displays both MSAs and, in italics, metropolitan divisions (MDs). California's MDs are in the Bay Area and in Los Angeles and Orange Counties. MDs are a part of larger MSAs, which also are displayed. 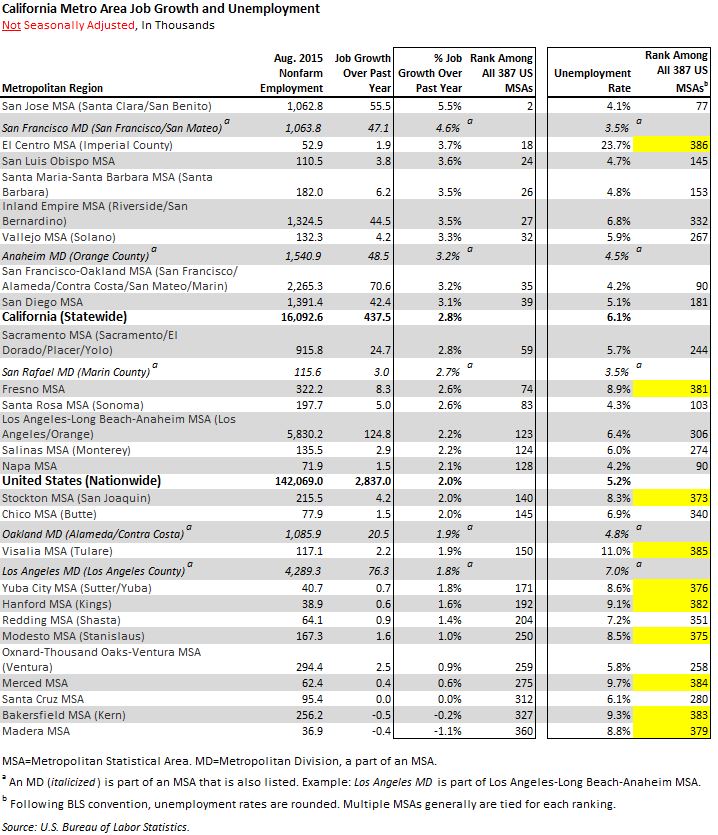 The Bakersfield MSA's 0.2% employment drop from August 2014 to August 2015 mirrors the experience of many oil-producing regions nationwide, with Kern County's estimated loss of 20% of its payroll jobs in oil and gas extraction, according to state Employment Development Department (EDD) data. The Madera MSA's 1.1% employment drop from August 2014 to August 2015 is tied to an estimated loss of 1,200 jobs in the "special districts plus Indian tribes" industry category, according to EDD data. Madera County is the location of a casino that closed a year ago but could reopen in the future.