May Auction Generates Substantially Less State Revenue Than Previous Auctions. The Air Resources Board (ARB) released a summary of the results from the most recent cap-and-trade auction held on May 18, 2016. Based on the summary results, it appears the state will generate roughly $10 million in revenue from the auction. As shown in Figure 1, this amount is substantially less than the amount generated from the last several auctions—all of which generated over $500 million each. Unlike the last several auctions, where all or nearly all of the state-owned allowances offered for sale where purchased, only 2 percent of the available state-owned allowances were purchased at the May auction. (About 10 percent of the overall number of allowances offered for sale were purchased—including allowances held by the state, utilities, and Quebec.) The allowances were purchased at the minimum price established by ARB—$12.73. 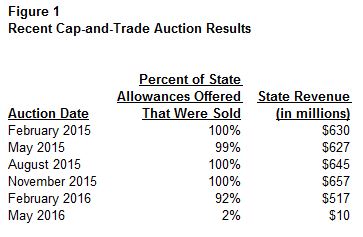 2015-16 Revenue Roughly $600 Million Less Than Assumed in Governor’s Budget. State auction revenue will be about $1.8 billion in 2015-16, or about $600 million less than the $2.4 billion amount assumed in the budget. Auction revenue is used to fund a variety of programs intended to reduce greenhouse gases. As shown in Figure 2, the lower 2015-16 revenue automatically reduces the amount available to programs that are continuously appropriated a percentage of annual revenue by more than $300 million. However, even with the low revenue generated from the May auction, there will be nearly $1.4 billion of unallocated auction revenue raised from prior auctions available to be spent on programs in 2016-17 or a later year.

Results Add Substantial Uncertainty About 2016-17 Revenue. Although state auction revenue has always been subject to significant uncertainty, the results from the May auction and the current market conditions create even greater uncertainty. At this time, it is unclear whether the May auction result is the start of a trend that will continue into 2016-17 auctions and, if so, how long such a trend might last.