April Personal Income Tax Revenues Make Up for Earlier Shortfall. As seen in the table below, April PIT collections exceeded estimates by $2.8 billion. This made up for the shortfall earlier this year. Previously, we had written about how the federal tax law changes likely were responsible for the December and January shortfall. (This appears to have been correct and PIT revenues are now on track for the fiscal year to date.) Based on April receipts, the federal tax law appears to have significantly changed the timing of PIT collections. Specifically, filers no longer have an incentive to pay a higher proportion of their state tax liability within the tax year. As a result, the state likely will see somewhat lower collections in December and January—compared to recent years—and much larger collections in April. 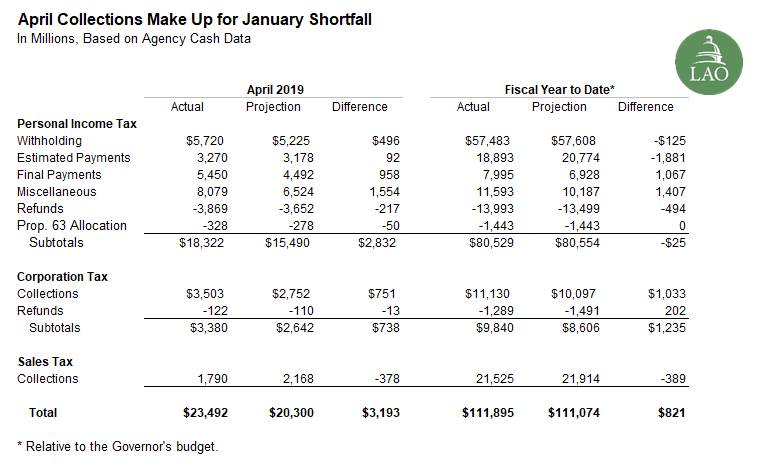 Corporation Taxes Significantly Exceed Expectations. In April, we noted that collections were coming in higher than expected. At the time, we did not know whether these higher payments were due to higher final payments—meaning 2018 was more profitable for businesses than expected—or due to higher estimated payments—meaning businesses were more optimistic about 2019. Data from the Franchise Tax Board indicates most of the higher revenues were due to notably higher extension payments and higher quarterly estimated payments. As we explained in our May Revision Revenue Outlook, we believe that much of this surge in revenue likely is a one-time event in response to federal tax changes in 2017. While most corporations are allowed an automatic six month extension and will not file their 2018 tax returns for several months, they are required to pay the amount they expect they will owe. The higher extension payments reflect higher profit expectations for 2018; however, some of this amount ultimately could be refunded. We will not know the ultimate outcome of these higher extension payments until the fall when these businesses are required to finalize their taxes.

April Sales Tax Revenue Shortfall Likely Due to New IT System. As we have highlighted in the past, the introduction of CROS has affected the flow of sales tax revenue to the state. This change may not be fully reflected in the administration’s estimates of monthly sales tax collections. Consequently, our May revenue outlook assumed that the shortfall in April would be made up in May.