Personal Income Tax (PIT) Revenue Lower than Expected. As seen in the figure below, September PIT revenue fell short of expectations by $401 million. The largest shortfall was in estimated payments, which were15.6 percent below projections. So far this year, estimated payments attributable to tax year 2019 (February through September) are running 0.7 percent below the same period in 2018 despite generally higher stock prices and continued economic growth. The September decline may be in part due to a general weakening of expectations for the rest of the year despite generally higher stock prices and continued economic growth: federal estimated and final payments fell 3.7 percent last month compared to September 2018. Moreover, at the state level, while September typically accounts for about 10 percent of total quarterly estimated payments, state law does not require filers to make payments in September.

Corporation Taxes (CT) Again Significantly Exceed Expectations. September is an important CT collection month for “fiscal year” filers. These are corporations that close their corporate accounting year in months other than December (many large corporations end their fiscal years in June or September). While April and June saw strong growth, last month was particularly notable, increasing 31 percent compared to September 2018. This amount exceeded the administration’s projection of $1.1 billion by 45 percent. Multiple factors contribute to this result. One, the administration’s September estimate likely was too low. Last September, CT collections were $1.2 billion and corporate profits nationally increased by 3.4 percent in 2018. Two, at this stage of the business cycle, individual corporations typically have exhausted the net operating loss deductions (NOLs) and credits they carried forward from years when they were unprofitable. Consequently, CT collections often increase more rapidly than profits in a mature economic expansion. Three, the federal government made major changes to the corporation tax code in 2017 that were widely expected to affect corporation behavior in ways that could lead to higher state corporation taxes. These behavioral changes include pass-through businesses converting to corporations (potentially explaining the decline in PIT estimated payments), corporations making fewer like-kind exchanges, and corporations spending less on fringe benefits. (Such changes in behavior should occur regardless of state tax conformity because the state tax rate is much lower than the federal rate.) 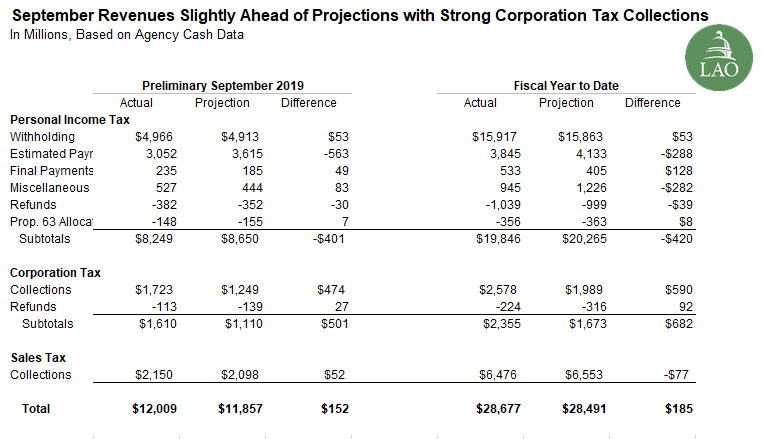