The U.S. Bureau of Labor Statistics (BLS) has released preliminary March 2015 jobs data for the nation's 387 metropolitan areas. Over the past year, some California metro regions have had some of the strongest rates of job growth in the U.S., while some of our metro regions continue to have some of the highest unemployment rates in the country. While California's economic growth remains somewhat dependent on the strength of the technology industry in the Bay Area, other parts of the state also are advancing in terms of job growth. (Previously on the blog, we discussed the preliminary March 2015 California state jobs data and comparisons to other states. As of March 2015, California's unemployment rate in the preliminary data was 6.5%, compared to 5.5% for the U.S.)

Job Growth Over the Past Year

Large Metros: Bay Area, Inland Empire, Orange County Near Top in Rate of Job Growth. There are 51 metro regions with a 2010 Census population of 1 million or more. The table below shows the top 20 large metropolitan statistical areas (MSAs) measured by the rate of nonfarm payroll job growth during the 12 months ending in March 2015. Six of the top 20 large metro job growth rates over the past year were in California MSAs: San Jose (ranked #1 among all large metros), the Inland Empire, the San Francisco/Oakland MSA, the Sacramento MSA, San Diego, and the Los Angeles/Anaheim MSA. In the Los Angeles/Anaheim MSA, Orange County had 3.7% job growth over this period, compared to 2.7% in Los Angeles County. In the San Francisco/Oakland MSA, the San Francisco metropolitan division (the part of the MSA in San Francisco and San Mateo County) led job growth. 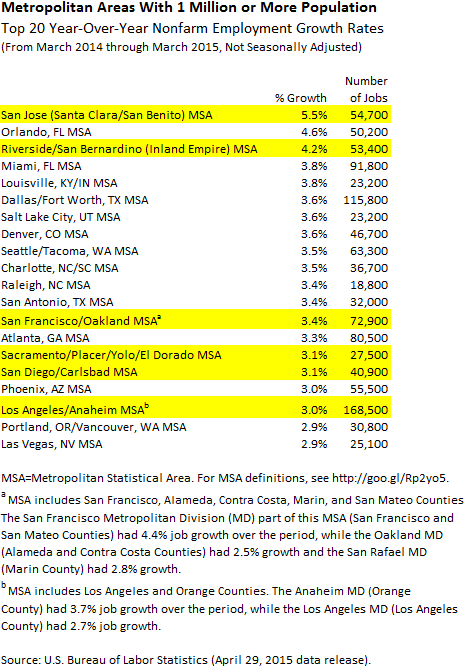 All Metros: Merced, Silicon Valley, Fresno Near Top in Job Growth. The table below shows the top 22 metro job growth rates over the past year among all 387 metropolitan areas tracked in the BLS data. Three of the top 22 are California MSAs: Merced, San Jose, and Fresno. 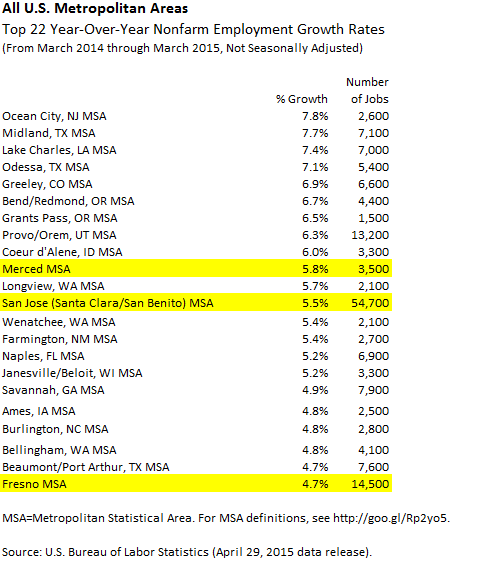 El Centro MSA Ranks Near Bottom for Metro Job Growth Over Past Year. With a significant concentration in agriculture, the El Centro MSA (Imperial County) had the second-lowest job growth rate among all of the 387 metropolitan areas over the past year, down 3.0% (-1,700 jobs).