Vast Regional Differences in Personal Income Tax Base. The county-by-county FTB data shows that there are significant regional differences for the state government's dominant revenue source, the personal income tax, as shown below. 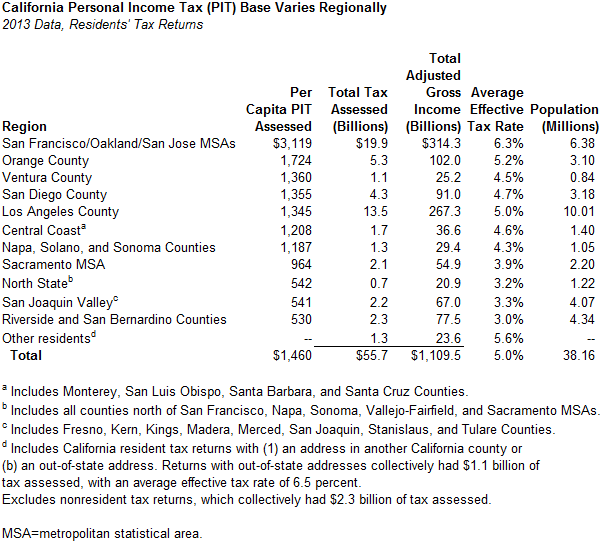 The Inland Empire, the San Joaquin Valley, and the North State region have per capita PIT and average PIT tax rates that are well below the statewide averages. In general, this results from comparatively lower income levels in those regions.

Changes from 2012 to 2013 Among High-Income Filers. In an opinion column today, the Los Angeles Times' George Skelton reported that the top 1% of PIT filers accounted for 21.8% of California adjusted gross income and paid 45.4% of the state's PIT in 2013. This concentration of the PIT among high-income filers is somewhat less pronounced than in 2012, when changes in federal tax law and the Facebook IPO resulted in temporary boosts of income for many in that group. The same types of regional differences described above were present in the 2012 FTB county data.