Recent Report on County Economies. The National Association of Counties recently released a report summarizing economic activity in all of the nation’s counties from 2002 to 2015. One map which was reproduced on The Wall Street Journal website shows whether counties have regained their pre-recession peaks on four measures of economic health: total jobs, the unemployment rate, total economic output, and home prices. California appears to be still struggling by these measures, as only a handful of counties in the Bay Area have recovered on more than two of them. A closer look, however, shows California's county economies to be in better shape than they may appear at first glance in this report.

A Closer Look at Home Prices. According to the report, home prices have exceeded their previous highs in just five California counties: all in the Bay Area. Home prices, however, may not be as good of a measure of economic recovery in California as they are in other states. While home prices rose above their fundamental values in many parts of the country during the mid-2000s housing bubble, this appears to have been more dramatic in California. According to U.S. Census data, California’s housing price-to-rent ratio—a measure of the level of speculation in housing—reached almost 40 in 2005, higher than any other state and more than twice the national average, as shown below. The lack of recovery of home prices to pre-recession peaks in many California counties, therefore, represents more of a return to normal than a weakness in the state’s local economies. Furthermore, considerable evidence—detailed in our office’s 2015 report on housing—suggests that high housing costs place a drag on the state’s economic growth, a problem that could be exacerbated if home prices were to return to prerecession levels. 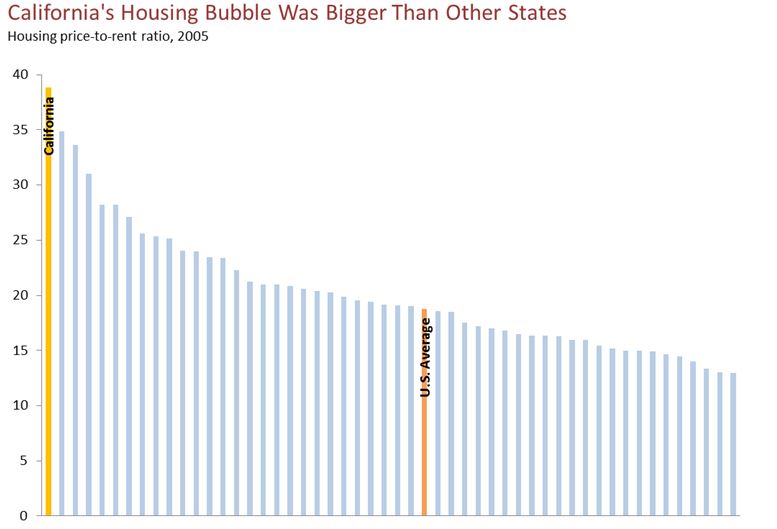 More Detail... The figure below is based on the data from the National Association of Counties report and for each California county shows exactly which (if any) of the four economic measures have regained their pre-recession peaks (indicated by a "Yes" in the applicable column). Ordinarily one would expect economic output to grow (and hence recover) faster than employment, but the state has a number of counties where jobs have caught up but output hasn’t.